Rustomers: Do I Call The Cops or The Jops?

My name is Rus.
Here's one of many crazy IT customer stories from over the years as an Apple Tech.
The first 3 installments are published here:

You Better Do What The Boss Says
The bMac
Rus!
Back in mid-2005, I started working for a computer repair shop as their Authorized Apple “Repair Guy”. I worked there for a little over a year.  I had invested financially in the business with the hopes to expand Apple repair in my area and implement a unique wireless internet technology they had exclusive rights to.
After having served as the manager of an Apple Store and being an Apple Genius at two other Apple Stores, I was trying to help Apple scout out a location for my home area. After multiple attempts to get them to my town and failing, I finally decided to open my own business. I needed to start out small and work my way up. So, I began with this new business. My desire - at a later date - I would open a new branch in a different location in town that solely focused on Apple repair. At the same time, I would be an exclusive internet provider to my Apple customers.
Besides Best Buy & a CompUSA store, the location was - with me - one of two brick & mortar locations that did authorized Apple service within 100+ miles. I had previously served as CompUSA's  authorized Apple Tech, so I took a lot of their customers with me as they had a very poor reputation otherwise. The local CompUSA ended up closing less than two years after I left. Best Buy, in my town, also had a pretty bad reputation for computer repair. A few other  notable repair places had closed or contracted in size, so Apple sent most of their authorized repairs to my location.
This meant that the location I was working at was the only business that wasn't a large national chain that was doing Apple Authorized Service Repair. 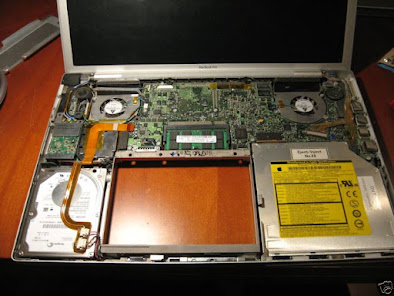 One day, a customer comes in and I happened to be running the check-in at the front desk. He put a rather unusual looking Apple laptop on the counter and asked if we "worked on these". I said, "Yes we do and I happen to be the Apple guy." He explained that he had recently moved, that his laptop had been in storage for a bit, and he forgot his password. He asked if I could "get in and reset the password, or just remove it."

Most computer repair techs know that usually this is code for "I stole this laptop or obtained it nefariously and I want to use it for myself or sell it, can you break into it for me so I can continue my criminal plan."

I said, "Sure, I can look at it, do you have the power adapter?"
He said, "No I need to buy a new one, my dog chewed through the wire on my old one."
I didn't let on that this was getting more and more suspicious

I am thinking to myself: "Really? You're gonna give me the dog chewed through the wire bit?"

I proceeded, "I've got one, I'll just use mine."
He said, "How much to buy a new power cord?"
I assured, "When I get it repaired, I'll sell you a used one for $40 added onto your service of $85."
He said, "Oh, you can't just do it right now? You're my Apple guru, you can do it right now licketty split. I have confidence in you."

I wanted to say, "I have just 'con' in you. I need 24 hours and I'll have it by tomorrow afternoon."
(I left off the first part)  He agreed. I did however ask him to fill out the paperwork for check-in.
He said, "Oh I trust you with it, I'll just pay cash tomorrow when I pick it up."
I said, "Ok. Then I need at least a first name and phone number."

He wrote it down on the checkout form.

I said, "You know what, I'll just do it for the cost of the power adapter, but I don't have that here - so I'll have it ready first thing after 1PM tomorrow."
He exclaimed, "GREAT! SEE YOU THEN APPLE GURU!"
He exited the door and I immediately pulled out a power adapter and startup CD. I removed the password and rebooted. I doubt his back tire had rolled over the last of the pavement in the parking lot before I had it completed.
The laptop booted up to an excel spreadsheet - contained on it were sales figures from Apple Educational Sales. Also, next to that the notes application with "Note from Steve: If you need to close the sale, I'll make it happen. Call me at ***-***-****."
I proceeded to look at the contacts. The computer owner was listed as a known local Apple Executive. I proceeded to browse through the contacts. The Steve number was STEVE JOBS! A personal/private number. OMG!

I shouted out pretty loudly, "I can't believe this."

The Boston accent, manager of the business said,

"What is it Apple Guy?

Did Steve Jops just give ya a promotion?"

Everyone gathered around me at the front desk. We each were in awe!

I told them my suspicions about the laptop and we discussed how to handle it. I told them I wanted to contact the owner of the laptop first and ask him how to proceed.

I went back to the contacts.

I won’t lie, I wrote a few down: Steve Jobs, Phil Schiller, Jonathan Ive, and of course, the owner.

I turned the laptop off and turned it over.

The label on the bottom had a “DVT sticker” on it meaning that it was an Apple prototype.

I decided to open it up. The specs were to say the least - extraordinary on the Apple side. But what was more interesting was the specs of the optical drive. The optical drive wasn’t there. Instead, there was a blue board with an Intel Core Duo processor on it. There were wired leads going to places all over the PowerPC side of the laptop. Take into account that this was mid-2006 - six months before Jobs would announce to the world that Apple was switching to Intel processors.

I put the laptop back together and rebooted it. I couldn’t figure out how to boot Windows or figure out how to use the daughter card. I checked the Apple System Profiler. It stated 2.87Ghz G4. (I now think that it may have actually been booting off of the Intel processor and masking a G4 to the OS.)

I felt strange messing with everything much more. I shut it down. At 6:30PM, I called the owner. As discovered, it was an Apple Executive - someone my best friend actually knew. (Yes I told my friend before calling the owner to tell him the amazing story.)

The owner was relieved. He said he had just moved into a new house and it was missing from the move. He asked me how I got it. I told him the name of the person that brought it in and gave him a description. He said that was the head of the moving company his family had hired for his move.

I offered to meet him at a local coffee shop to give him his laptop back.

After the exchange, and buying me coffee, he expressed that he wanted to press charges against the thief. I asked if I could check with my business associates as to how they’d like to proceed.

The next day, I set up with the City Police a basic sting. I’d call, saying the laptop was ready for pickup, he’d come in, I’d say the magic words, “Glad I was able to get this fixed.” (if and only if I could discern that there was no weapon or no harm would come to me) and police would swarm from the back and arrest the suspect.

The suspect came through the door. (I had moved several boxes to the top of the counter and other boxes blocking the only route to behind the counter.)

He got about halfway to the counter and I said,

I didn’t  get the rest of the sentence out. With guns drawn, police officers swarmed the suspect. It was rather funny. Everyone in their offices were doing a very poor acting job “to not notice”.  The suspect, instead of giving me an evil look, gave me the “I coulda cut you in on this” nod and then a smile.

After the cuffs went on, everyone came out of their office.

“Steve Jops needs to give the Apple guy here a promotion!”