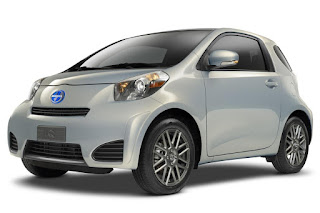 If you are wanting to reduce the weight of your iQ wheels significantly, you'll most likely have to move to 14 or 15" rims with a 185/70/14 bigger tire for instance. Just make sure the tire height/diameter is still close or your odometer and fuel economy will skew. Your turning radius will significantly reduce as well. It’s also much easier to bend rims because of the short wheel base - hitting a pothole or road debris.

You could move to 17" rims and smaller tires, but your curb weight is likely to increase and thinner walled tires are not recommended on the iQ.

My research indicates that using spaces to covert to different lug nut patterns on the iQ is a big mistake.

1) Tires should be the same diameter, but can be different widths - often vehicles will have wider tires on the rear axle. It is not recommended to go beyond 6.5" in width on the front tires and because of the short wheel base it is recommended to stay the same width back and front.

2) Having a different diameter than factory will throw off your speedometer calibration, as this is dependent on rpm count of one of the wheel hubs.

3) Larger is generally better as a rule of thumb, within normal limits. Larger diameter = less revolutions of the wheel to cover a given distance OR cover same distance faster. Wider = more traction, but too wide can result in interference, especially with steering set wheels.

It is illegal to resell your car if you know the odometer and speedometer are incorrect.

You must put on your title that your car exceeds its mechanical limits.

The math showing just 1” in tire size difference is as follows:

1” under and you’re traveling 104 miles on odometer reading but really only going 100 miles. 96 miles per 100 the opposite direction.

If your wheels are more than 5 pounds heavier than the stock 38.5lbs you’re adding significant stress on the engine.

I found this page particularly helpful in deciding what I wanted to do and achieve:

I will continue to update this post over time as I discover and learn more about this topic.

I am currently investigating speedometer and odometer calibration in regards to changing tires and rim sizes.

This morning I woke up to no WiFi ...

I tried resetting my router. ❌

I unplugged everything for 15 minutes ❌

I tried a different modem. ❌

I thought, it couldn’t be the WiFi router because it’s brand new.

It’s also their most expensive model and  guaranteed.

I called Linksys anyway to see what was wrong.

After nearly an hour on the phone, I ended up going back to factory settings. ✔️

That worked! Sort of.

Now I had a message on all my devices stating that I needed to call Comcast to reinstate my account.

I googled that message and the error code to see if the message was legit and make 100% sure my router had not been hacked (which is a common recent issue by the way.)

Comcast stated that they had deactivated the access to my WiFi router after ...

I was told that Comcast doesn’t allow networks by malicious or offensive names because anyone with a Comcast account can login as a guest on any Comcast network. I was told that my tier of service/pay didn’t allow for changes.

I inquired, “But that’s my actual name.”

Me: “Yeah but I go by Rus, which is short for Rusty which is my nickname that I’ve gone by since I was too young to remember.”

Service Rep: “Well Mr.Smith, that name is one of the names on the unacceptable list of names for networks under Comcast’s terms and conditions.”

Me: “Just for the record ... I’ve also called my network ‘FBI SURveillance’ in the past. That network name also contains my nickname. I see it too is not allowed”

Me: “Capitalize the first three letters of SURveillance.”

Service Rep: “Simply change the name of your network to something that’s not on the list I sent you.”

Me: “Done, I just changed my network name to “Rusteeze Bumper Oil”