In a former life, I repaired computers - more specifically - Apple computers. From time to time, I still dabble in IT work as a side income.

I say the words, "former life" almost literally as I feel I may have died - several times - come back only to be able to relate these stories to you  ... much like the character in the TV series "Forever". (preview below)


Here is one of many insane stories of customer service nightmares I've had to deal with over the years. I'll add to this story in the weeks to come.


You Better Do What The Boss Says

In the times before Apple Stores were within a reasonable driving distance, I was in pretty high demand. Also, in some cases, certain people, for certain reasons didn't want to go into a large retail establishment - especially a shopping mall.

I used to work in a small computer repair shop as
"The Apple Guy" ← that was kinda my unofficial title. 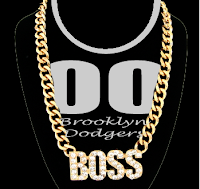 One day, a tall, rail framed, young white male with a scar through his left eyebrow, diamond stud earrings, a backwards hat that said "Brooklyn" written in graffiti-style cursive above the plastic sizing snaps, acid washed jeans about mid-thigh, jockey underwear showing, a sports jersey style shirt that said "00" and "Brooklyn Dodgers", and a very large gold chain around his neck with what seemed to be a solid gold and diamond studded emblem that said "BOSS" around his neck - came into the shop to ask for a diagnosis of his Apple laptop that wasn't booting.

I should stress that he asked for a diagnosis - and specifically said several times to call him before I made any repairs. The diagnosis was a standard $35 dollar charge - of which - the balance was applied to your final bill should you have our shop repair your computer. I confirmed that the unit was not booting in front of him while he turned the laptop towards me over the customer counter.

I don't want to make this sound stereotypical - but it was. This guy had bloodshot eyes. He had what looked to be heroin bruise holes and belt/tourniquet marks on his arms. Every sentence he spoke began with, "Here it is" like he was about to break dance for me and every sentence ended with a hip hop style, "you know what I'm sayin' yo"

He filled out his paperwork with only a first name and a phone number.

The first name he wrote?

He left the shop and I started immediately into it. As was my standard practice, I used a program called "Diskwarrior" to see if I could diagnose and fix the booting process and then go from there.

Upon finalizing the boot, several programs/documents were apparently set to launch on startup. A map of a nearby neighborhood popped up that had red dots on it. An excel database popped up with names and phone numbers. A word document with numbers that looked to be balancing a checkbook popped up. I honestly didn't examine it thoroughly, but it was kinda obvious what popped up. It was a narcotics delivery and balance sheet.

I immediately shut down the laptop. I waited a little while then consulted with my colleagues about the situation. We agreed that I would wait 30 more minutes then call him and tell him his computer had been diagnosed and to come back in. I should have followed that exact plan. Instead, being excited that I had fixed the unit in less than 15 minutes and his only charge would be the diagnosis fee - I called him after a little more wait and said ...

"Your computer is fixed."

I was going to add that it was fixed in the process of diagnosis, but I was interrupted with a very loud scream through the phone.

He arrived. His face was red. He opened the door violently - and if any harder - he'd have ripped it from the hinges like The Terminator after John Connor. He came up to the desk and said,

The more he yelled, the more purple his face turned - the more I could see his jugular vein in his neck pulsing.

He continued for another 2-3 minutes - repeating the same thing over and over. All of my colleagues came out. One of my co-workers who was a rather big guy said,

"Look, how about we give you your money back. It looks like the Apple Guy here followed your instructions exactly, it's just that sometimes - the diagnosis fixes a computer. There just wasn't a lot wrong with it. Just something out of place."

He started breathing hard. I could see what looked like the outline of a gun on his hip slightly protruding after each stomach pump from his hard breathing

With not a word further. He put a $50 bill on the table. He stormed out with his laptop like King Kong about to scale the Empire State Building with a girl in his hand.The End.

Email ThisBlogThis!Share to TwitterShare to FacebookShare to Pinterest
: Rustomers, Tales From My Past