I bought a DART, But Got TRANKED Powerless By Their Customer Service. 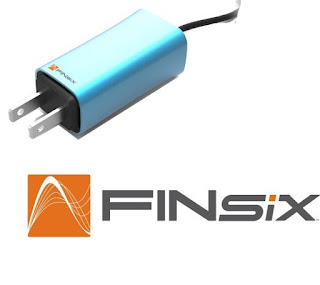 I guess it seemed cool, with a successful kickstarter campaign and all ...

In the original fundraising text on kickstarter, FINSIX promises with the DART ...

"One, tiny Dart. Power for all your devices.

Perfect for your mobile lifestyle."

Then there's this gem of jargon ...


"The Dart is the world’s smallest, lightest laptop adapter. At a powerful 65W it is a perfect complement to today’s thin, lightweight, portable laptops. It fits in a pocket and is designed with a USB port and single outlet profile to make it easy for you to stay charged up when you're on the road. We hope you are as excited about the Dart as we are and looking forward to finally carrying just one, tiny Dart to charge all your electronics. Join our campaign and never be stuck powerless again!"

I admit, I liked the wording. So, when I saw the product at my local Staples and thoroughly examined the box, I was excited. I thought ... "Okay, gonna power me some Macbooks and chrome laptops!"

Why on earth did I think that?

Because FINSIX said so, right on it's box.

But here's the real gotcha in that wording ..

Yes, I read "Check your compatibility at finsix.com/compat", but I see absolutely no one in a store, besides me EVER, researching products, especially Universal AC adapters that will "power all of your devices - tip compatibility gauranteed." What about senior citizens? Most don't have a smartphone, and the ones that do, don't use them like that - in store. I mean, I'm an IT guy who repairs computers and I admit, I was duped by the awesomeness.

So, I get it home. It doesn't have a USB-C tip. It doesn't have a Macbook tip. It doesn't even have an older iBook tip - like nearly all Universal laptop power supplies do. The Macbook at several points during its sales trajectory has been the number one seller. I can actually understand not including a proprietary tip like the Apple magsafe tip - even though the wording might tell the novice differently. What I don't understand is the USB-C tip - which is common among several brands of computers now.

Let's give FINSIX a pass on Apple adapter tips for a moment.

What about Chrome laptops?

Nope. The two most common Chromebook laptops are made by Dell and Samsung (which are technically the same) - also no tip included.

So, I decided to send an email to get my tips - because you know - tip compatibility guaranteed right?

I won't bore you with the details, but to make a long story short .. the DART is not the DART-C. So, even though the manufacture date of the AC adapter is rather recent (2017) - the DART doesn't fit laptops released over the last 3 years. There's an entirely different universal AC adapter. So, even with tip compatibility guaranteed, no DART for you! But wait! If you want to fork over an additional $30, DART will ship you a DART-C cord/tip/whatever.


The Macbook? Well, that's interesting! After failing miserably with a customer service guy at DART, I tried for a MacBook Magsafe magnetic tip/adapter. I was certain this would also be a gotcha. To my surprise, I was told that a MAGSAFE 2 tip was available and for the free shipping as promised on the box. That's interesting because Apple didn't license that tip out to anyone (nor did they license out the original Magsafe adapter.) Although the Magsafe adapter was extremely awesome, Apple actually went to USB-C on it's laptops so it could be powered by universal chargers.

So, I got that tip in the mail a week later. I'm happy, but kind of in the way the tree, cut to just a stump, in the book, The Giving Tree is happy. 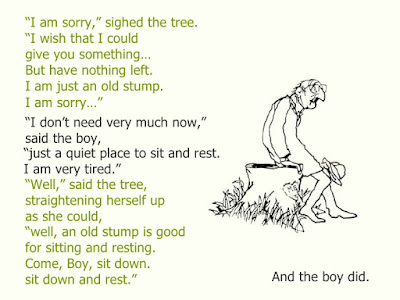 But guess what! I had bought several DARTs at Staples. So, I asked for another tip - a Samsung Chromebook. Nope. FINSIX/DART wouldn't send it to me. Why? I got a weird message about only powering 18.5 volt to 20 volt laptops. Wait, I thought MIT engineers designed this thing as an AC adapter. Nikola Tesla says AC is better than DC because Alternating Current (AC) is better than Direct Current also known as (DC) For the record, the adapter supports 5V USB connections. 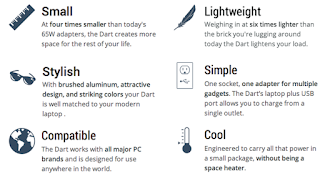 I could pick each one of the above as false statements but I want to focus on one in particular. Most AC adapters within the past two years are pretty small. So I think they could get by with "half the size of most adapters".

"At a powerful 65W it is a perfect complement to today’s thin, lightweight, portable laptops" 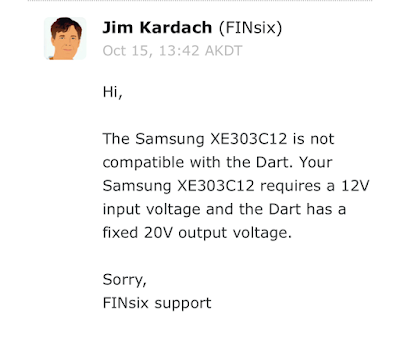