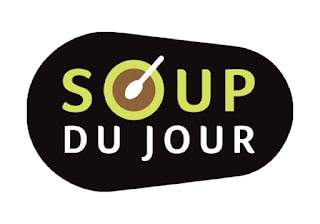 So I go with [a friend] to Four Chefs restaurant tonight ...

I love all of the food there; particularly their soups. I have to order a cup, no matter what kind they're serving. The menu says

A new, first hour on the job waitress comes up to our table and I order a French Dip sandwich and ask ...

"What is your soup for today?"

Me: "I LOVE your soups but what kind of soup is served today?"

Waitress: "It's called soup du jour it's like a creamy corn chowder"

Waitress: "Well, they call it soup du jour here. I always called it corn chowder. My grandma used to make the best."

(I gave up at this point trying to argue or understand)

We laughed at the table for a bit.

One of the chefs came out with our soup ...

Me: "We were like who's on first there for a while - I felt like Costello saying, "I know it's soup du jour Abbott, but what kind is it?"

In the field on the credit card receipt I put