A Review Of The Movie That Isn't Called "Superman" 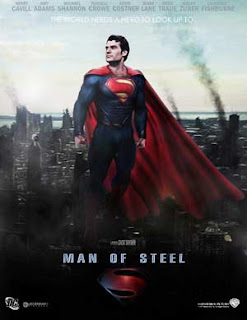 I'm going to be a man and just come right out and say it, "I didn't like this movie".

It wasn't the worst movie I've ever seen, that's about the best I can describe it.

So many elements of the story lack explanation, meaning, or are just out of place.

The story doesn't seem to fit together.

Much of Superman's American patriotism is lost.

* Although admittedly in the last "reboot" of Superman, Perry White, editor in chief at the Daily Planet said, "Superman fights for truth, justice, and all that other stuff".

The line used to be,

Actor Michael Shannon, who plays General Zod, the film's villain, is unconvincing and the majority of his "tactics" for Superman's demise are very poorly scripted.

The movie's fight sequences while fun to watch at first for their massive destruction of two titans fighting, drag on causing trillions of dollars in damage.

You know the story of Superman, so it's not important to this review to rehash any of the plot. There isn't much of a plot twist.

Many pieces of the story don't fit together, so it would be hard to write a plot review anyway.

I looked at other reviews that did give a plot summary and most are just, "a man discovers his extraterrestrial origins."

The "S" having a different meaning on Krypton is a compelling story element.

The story has been altered for the sake of altering it and making it more modern of a tale.

The script seems disjointed, leaving too much open ended.

The fight sequences drag on and are over the top, seeming to want to top Marvel's Avengers movie rather than entertain the audience.

I do not recommend this movie.

* Side note: in case you were wondering why they didn't call it Superman: Man of Steel. Copyright ownership was in play. The rights weren't obtained to naming a movie "Superman" long after production had ended and it's one of the reasons we haven't seen an entry in the Superman franchise much sooner. Alexander & Illya Salkind (and their estate own the rights).