Apple, Still Going Out Of Business Better Than Ever 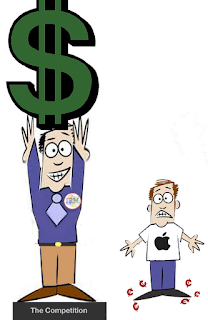 From October 2011 through September 2012, the combined net profit of Microsoft, Google, eBay, Yahoo, Facebook and Amazon was $34.4 billion.

Apple, in the same period, made $7 billion more IN PROFIT.

Apple, in the same period, made roughly $22 billion more IN PROFIT.

The odd part is … Apple announced that their profit was below market expectations - the stock has taken a 70 point hit!

Apple, on the other hand, is hiring and growing their payrolls by around 100 a week.