Batman: The Dark Knight Rises … All ears (and eyes). 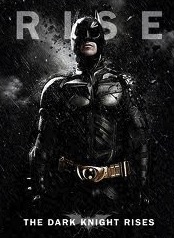 I'm a movie buff. For those that don't know me and haven't seen my living room … I have 14 movie posters lining the walls. One of these posters is from the movie Inception.

The Dark Knight Rises, and the trilogy of the most recent Batman movies, have all been directed by Christopher Nolan ~ who is also director of Inception.

I'm a pretty tough movie critic. I have to be honest and say that I have liked most every Christopher Nolan directed movie except these Batman entries.

I love Batman, mostly because he could possibly be real. His powers as a superhero lies more in his spirit to fight injustice and perseverance no matter what the odds. I've always had this idea that someone like Bill Gates could really fund a secretive eccentric superhero double life.

Those themes certainly prevail in this movie. That said, there seems to be too much drama without any character development. It seems they made the movie 30 minutes longer than it should have been.

I'm not a fan of the "I'm going to talk deep, so you won't recognize my voice" voice that Christian Bale delivers. It almost ruins all of Batman for me.

I also have to admit that I wasn't a fan of Catwoman being portrayed by Anne Hathaway. I'm not a fan of Anne Hathaway looks wise or her acting abilities. But, she hit this out of the ball park! She also had one of the most clever costumes EVER in a movie. I won't give it away but it REALLY makes sense once you see it and makes you smile at the awesomeness.

Speaking of acting, actor Tom Hardy reveals one of the most convincingly evil roles as a villain to date.

I'm still going to say Jack Nicholson as The Joker is #1 in the Batman movies, but Tom Hardy nails this newer, more modern version of Bane ~ relating his evil to anarchy and lawlessness. His voice acting is incredible behind the Bane mask.

Hardy is said to have gained nearly 30 pounds of muscle for the role. It shows. He looks buff and like someone you do not want to mess with!

Bane is one of my favorite Batman villains. He received the worst visioning of a villain in the 1997 Batman & Robin disaster ~ directed by Joel Schumacher. He certainly is done justice in this entry by Nolan. He's given a completely different story and purpose as a villain than he is in the previous movie adaptation and from the comics where he debuted.

Plot-wise - I do believe the movie could have been shortened - leaving out some of the Commissioner Gordon drama (Gordon is played by actor Gary Oldman). That said, you really can believe the terror plot to take over Gotham City and see how the government would be powerless against the plan that Bane puts into place.

I'd also like to mention that, like this summer's earlier superhero blockbuster, The Avengers … I was pleasantly surprised to not hear a single curse word. At least, none that I could put an ear on. The violence is very dramatic, hardly any blood. Their is neck snapping, but I do think this is truly a movie your children could see … they may start to squirm a bit during the dramatic parts though.

The ending is a typical Nolan plot twist and worth the ticket price just to see.