Will You Vote For Romney, Obama, Or A Condo In Cozumel? Telemarketers Illegally Using Political Surveys As Foot In The Door To Sell You Stuff 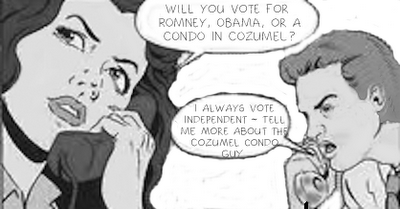 This story below may assist you with recording your phone calls and knowing your rights.

The Federal Trade Commission is warning consumers that telemarketers have found a new way to harass you by phone and to get around the Federal Do Not Call List & Registry ~ hiding a sales pitch behind fake political surveys.

Telemarketers were barred from robocalling sales pitches, after a record federal settlement in a lawsuit filed by The Federal Trade Commission in April of this year. Shortly after the $30 million dollar settlement, a new phone campaign called "Political Opinions of America" started offering a "political poll," and then offered a reward that sounds a lot like a classic sales pitch for a timeshare condo.

An automated voice asks the call recipient to complete a quick survey with questions like:


“What’s the most important thing to restore our economy?”

“How would you rate the job that President Obama is doing?”

After answering, one is then transferred to a live operator from “corporate travel services” @ The Berkley Group who is giving away free cruises or offering timeshares ~ with a small deposit per traveler of course … payable by credit card.

Contained within a statement on the website of Shapiro Haber & Urmy, a Boston law firm that is preparing a potential class action lawsuit against the Florida-based telemarketer The Berkley Group:


“We believe these companies make unsolicited calls, purportedly as a political opinion poll being conducted by ‘Political Opinions of America. Then, one is offered a ‘free’ cruise, which is really designed to expose people to sales pitches for vacation timeshares. If you received such a call, you may have a claim against these companies, whether or not you paid them any money.”

Clearly, The Berkley Group who is masking the political polling calls is in violation of the Federal Trade Commission’s Do Not Call Registry, which bans unsolicited commercial calls to any number contained on the list.

Federal Trade Commission officials have not stated whether they are investigating the campaign, but the Florida attorney general's office has received dozens of complaints about the phone campaign, according to a spokesman for Pam Bondi, the Florida Attorney General.

"This should be a warning to all telemarketers. You can’t evade the Do Not Call Rule by disguising sales calls as surveys." ~ Lydia Parnes, FTC Bureau of Consumer Protection

Businesses must obtain your written permission before they can legally send you pre-recorded messages, even if your number is on the National Do Not Call Registry, and even if they have an established business relationship with you.

If you get a robocall from a company that hasn’t gotten your written permission first, it’s a scam.

A business that's legit will want to be compliant with the FTC and not risking the steep penalties of up to $16,000 per call.

The FTC guidelines state that if the purpose of the call is to sell something, it's telemarketing and all rules apply.

The tricky part is … politicians and political groups aren't bound to the same rules (or many rules at all) when it comes to calling, mailing, or marketing. Politicians can claim 1st amendment/free speech rights while unsolicited telemarketers are considered an invasion of privacy. When the FTC amended the Do Not Call Act in 2007, politicians specifically had it written into the act that they would be exempt.

In 2011, The Department of Justice filed a complaint that charged three companies in Utah for deceptive and illegal telemarketing strategies and for placing calls to more than 16 million phone numbers on the National Do Not Call Registry.

In 2006, the Department of Justice also charged another telemarketer of adjustable beds for allegedly making at least 900,000 unlawful calls over a three year span. FMFG, Inc., which also did business as American Adjustable Beds,  called consumers requesting they take a survey of their sleep habits and then were asked to schedule presentations in their homes.

If you get such a phone call, you might be best advised to listen to the entire conversation and RECORD the conversation. Turning this information in to the FTC may even provide you with a reward.