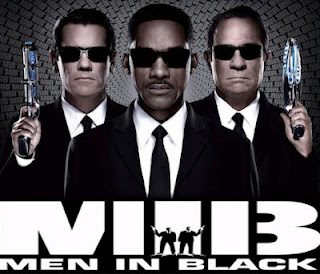 So far, I've liked the Men In Black series of movies; the first one being the best.

I definitely think this movie has a much more serious tone than the rest and I didn't find myself laughing as much as I did sighing that something was clever or cute or a cool gadget.

The ending seemed to be a slight tearjerker for a few in the audience.

Brolin’s perfect Tommy Lee Jones/Agent K impression is definitely the movie's highlight. The voice, the mannerisms, the delivery - it's almost as if Brolin was Jones' son or real younger self.

The plot centers around an imprisoned alien nicknamed Boris The Animal … an alien so dangerous that a specific area of a highly classified maximum security prison on the earth's moon houses him. Boris escapes and plots to time travel back to 1969 to kill Agent K the day that he was imprisoned. Agent J (played by Smith) makes the same leap to stop the alien from killing his Men In Black partner.

If you're a fan of the Men In Black series, you'll definitely like this installment. It's a good diversion.

I wasn't that impressed with the addition of cursing in this movie. They definitely push the violence and language barrier of the PG-13 rating.

As for child appeal … As a parent, I'd wait for this on TV. I think the amount of cursing crosses the line - although by the time its on TV - it may not be edited out. I also think the alien ~ Boris The Animal is rather terrifying (played by Jemaine Clement of Flight Of The Conchords fame)

Again, solid 7 out of 10. If you can see something better … I'd probably go for it instead.