How do I unsubscribe from unwanted French or Japanese iTunes & Apple Product News emails ...

For over a year now …

I've been receiving unwanted iTunes emails that are directed to my custom domain name. I've called Apple customer service dozens of times and was assured the emails would stop. They haven't.

One of my New Year's resolutions is to try to cut down on the amount of junk or bulk email I receive in an effort to cut my data usage on my iPhone. I have a feeling my unlimited data plan days are numbered with AT&T.

NOTE: I don't even get marketing emails from Apple (or iTunes) in English. I keep up with Apple news pretty well and don't need to know if the latest iPod Touch has been released or the latest Christina Aguilera single is out.

So, I went to Google to see what words in French and Japanese meant "unsubscribe". I also learned where in general the "unsubscribe" link is on each of the emails.

The word "Se désabonner" means "unsubscribe in French.
NOTE: If you're wanting to accomplish the same thing, you may have to unsubscribe separately from iTunes, Apple Product, iBookStore, and customer service emails individually.

Even if the boxes are unchecked, still use the update button to update your preferences.

After you update your preferences, you should get a confirmation like this … 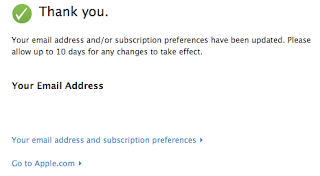 Hope this helps anyone with the same frustrations.