Another Reason I Hated School ... 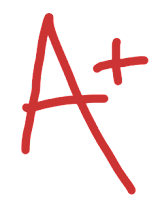 This is a confusing issue and I can tell you another way in which this same kind of numbering is often miscalculated.

The second, looks like a 6 point grading scale, it's actually 7.

It's one of the mathematical illusions that our brains are trained to summarize.


We want to subtract 10-4 and get 6 rather than count each number .


I hated that the teachers insisted this was an 11 point grading scale, even though I understood the numbering.


I guess what I hated most was that the grading scale went from missing two questions was still an "A" to missing only one question and being a "B" on certain tests.


50 and 100 question True False and multiple choice tests were my friend ;-)
No comments: