Is There A Wired Ethernet Adapter For The iPad?

I received this question on eBay the other day from a potential buyer:

Dear fixyourthinking,
I recently purchased an ipad. I travel often and at some hotels that do not have wifi, an ethernet cable is available. Will this adapter work with the ipad? Can it be used when traveling internationally? Thank you.

Unfortunately, the adapter I sell does NOT work with the iPads. First, there's no way to hook it up as the iPad 1 & 2 do not have a USB port - they have a dock connector port. Even with adapters, you cannot use an ethernet/USB adapter with the iPad as it requires a driver. It is unlikely that such an adapter will be made as Apple doesn't allow network access through the dock port of iPads, iPhones, or iPod Touches.
A company called redpark does make an RJ-45 to iPod adapter but this is NOT an internet connection.
Here's their description for their product: 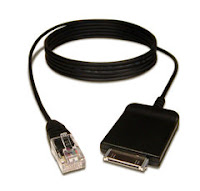 6 foot long serial cable with RJ-45 connector.
Connects an iPhone, iPad or iPod touch to the console port on Cisco networking gear.
Designed for use with the "Get Console" app available on Apple's "App Store". The Console Cable is not compatible with other iOS apps.
The RJ-45 connector is wired per Cisco console port spec. This is not an ethernet cable. 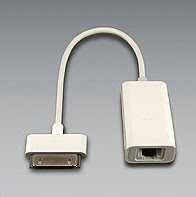 They had originally offered up this design, but went with the product above. Again, this is for interfacing with Cisco networking equipment. Since this is a serial cable, the pinouts are completely different than an ethernet cable that would give you access to the internet if you plugged it into a broadband port on your cable/DSl model or a wall RJ-45 connection.
No comments:

Email ThisBlogThis!Share to TwitterShare to FacebookShare to Pinterest
: iPad, Networking, USB to Ethernet Adapter For Macs

I actually noticed this about a month ago, but it's officially official now.

As many dedicated readers know ... I was involved in a nasty, lengthy legal battle with a company called Bidzirk for most of 2006 & 2007. This eBay consignment company sued me for defamation, invasion of privacy, and copyright/trademark infringement after I wrote an investigative report using my personal experiences as a template for the cautionary piece. None of their claims held up in court and the plaintiff attorney was sanctioned, scolded, and embarrassed in an unprecedented fashion.

Since the case closed, I've moved on with my life ... I got married and I found my true calling as a writer (using my secured rights as a blogger from Bidzirk vs Smith).

I don't update this site as much as I used to, but it earns me a buck or two on occasion and I maintain the telephone recording laws section rigorously.

I think it's noteworthy though that Bidzirk has changed its name to Digglebee.

I don't know what their new logo will look like. I never thought "a monkey" was a good logo for a company anyway ... neither was the name "Bidjerk" ... I mean "Bidzirk". It seems to continue the trend of obscurity and branding hilarity with the name Digglebee.

The name makes me think of when someone says they laugh so hard it makes them wanna pee ... A GigglePee!

This really is quite funny. I know that the owner of Bidzirk paid tens of thousands of dollars for the original "Bidzirk logo" and related marketing.

Bidzirk's owner also $PENT $1000's to try and bury my website in search results - buying keywords at Google and using "Reputation Management Companies". This, in turn, caused me to lose 1000's of readers and potentially advertising contracts because of constrained hit totals.

This was recently left as an anonymous comment from someone who worked with Ty Schmidt, Bidzirk's owner & founder:


Just an FYI...Ty Schmidt was so frustrated at not being able to knock off your Bidzirk posts (and he owes so much money to creditors) that he has relaunched Bidzirk as Digglebee. He's on eBay and Amazon, and he'll be selling a wide variety of merchandise, including "adult toys" from his own site (which hasn't launched yet). Enjoy! http://myworld.ebay.com/ebaymotors/digglebee http://www.amazon.com/gp/browse.html?ie=UTF8&marketplaceID=ATVPDKIKX0DER&me=A990D4GW5EX18

Any sufficiently advanced incompetence is indistinguishable from malice.

From the decision on my case:

The court finds that the degree of Plaintiffs’ counsel’s culpability weighs heavily in favor of sanctioning the Plaintiffs’ counsel, Kevin Elwell (“Elwell”). Elwell is a competent attorney who knew or should have known with the most basic research that his actions were improper. In addition, after Smith moved to strike the lis pendens, Elwell argued in court that the lis pendens was proper. Elwell had no basis to support his position.

From The Washington Park Prophet:

Elwell lost the case on a motion for summary judgment brought by the blogger representing himself, in which the court took pains to explain just how weak the case brought was on the law. The legal theories and tactics he employed in the case described in the linked opinion strongly indicate that Kevin M. Elwell is a grossly incompetent and unethical attorney. The judge was entirely too lenient in sanctioning him in the case linked above which was frivolous.