Do I need a "press pass" for my website and how do I get one? Pt III 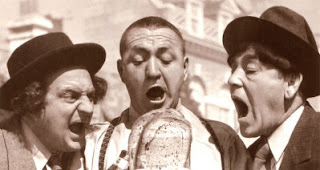 The SC Press Association also charges exorbitant fees to join and charges even more to create "press passes" - they even charge for the lanyard!

I've also found it rather ironic that The Pickens Sentinel (a local news source I would sorta kinda consider a competitor) posted this article from Bill Rogers; the Executive Director of the SC Press Association, within a few days of my first part of this series:

Newspapers A Vital Part Of The Community

In, this piece, the head of the SC Press Association is essentially deriding online news with bogus statistics and a case study done in Darlington, SC. It's almost comical in it's "1 apple + 1 orange = 2 apples" line of thinking.

I also looked into The Media Blogger's Association. I was once a part of this organization for this blog; being an honorary inductee. It seems as though they haven't updated their site in a long time and it's very spotty when it is updated. (It's essentially a side project for its founders.) Joining requires a somewhat bogus course in "legal action against bloggers" and a fee. I'm also not sure how credible you'd be seen by someone recognizing credentials at an entrance or "press gate". The name itself instantly brands you as a "blogger".

One worthwhile organization to be a part of is the Electronic Frontier Foundation (EFF). The EFF was crucial to me in a legal matter that I faced with FIXYOURTHINKING.COM. Membership costs "whatever you want to donate". They do good work in protecting "online journalism and blogging". They are somewhat controversial though and I'm certainly not for ALL of their projects. Once joined, you may want to put their logo on a press pass and put  "Member" under it. Something like what you see.

By far the most creative and simply functional "Press Pass" I've seen recently is that of a local freelancer named Vince Jackson. Vince freelances for The Anderson Independent and typically covers Pickens County "taxpayer" related news. I've found him at most political events I've attended. He's a great writer with thorough detail. He's also well respected in his relations with the public. He's one of the few local journalists that has a personality.

His answer to a press pass is a business card with the word "PRESS" on it. It also has his name, email and phone number.
I met Vince at a recent event and told him I was about to "publish" the story behind his card in relation to this story. He gave me some interesting additions ...

Vince said, "You are who YOU say you are and if you act the part. If a guy hands you a business card, that's who he is. Well, that's who I am."

He also added this anecdote; asking if I had ever watched The Three Stooges very much.

I nodded "yes" and he explained one episode where the Stooges wanted to get into an event, but didn't have the money for admission. As they walked away from the ballpark, they saw a vending machine that had buttons on it that said, "PRESS". They removed the buttons from the machine, placed them on their hats and tied some broom handles together to look like tripods and went up to the gate ... pointed to their hats and were let in.

He said that's where he got the idea of the business card. Clever!

So I created my own ... with email and phone number on the reverse side ... 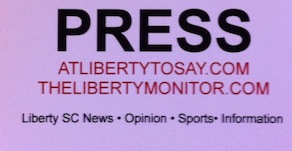 Lastly, I've been covering political campaigns pretty heavily. I've made sure one campaign has seen me and heard from me throughout their run for office. While I'm not expecting a return favor from this candidate - I do hope that when the Presidential race starts up in the summer that they might be able to pull a few strings to get me an interview with a pretty popular candidate.

So, do I need a press pass?

Read parts I & II of this series:

Do I need a "press pass" for my website and how do I get one? Pt II
No comments:

Email ThisBlogThis!Share to TwitterShare to FacebookShare to Pinterest
: blogger, blogger's rights, blogs, How Do I Get A Press Pass For My Blog

Do I need a "press pass" for my website and how do I get one? Pt II

I hate the term "blogger" and the term "blog".
It almost seems as if these terms are used to instantly discredit or put a writer into an inferior category of journalism; much like terms in the past such as "black" or "female" have been used.
In Part I of this series I mentioned …

"Many errantly think that a journalist or reporter has to somehow be qualified or certified or even has to be associated with a traditional media outlet like a TV or radio station or a newspaper."

Well, in the case of the South Carolina Press Association - this is true. You DO HAVE TO be associated with a "popularly circulated print or television news source" to be accepted. You also must pay an annual dues based on circulation or viewers. (Your State may have such an entity as a Press Association and their acceptance may differ.) I would not recommend going this route or pursuing anything with a Press Association, unless they have a specific BUT EQUAL acceptance of bloggers or websites.
So, if I can't get a "statewide" or "national" press pass - I have to go more local.
I first started with my local high school.
lf you are going to "micro-blog" or report on "local" news such as I'm doing with my site - one area of coverage is going to have to be the local school system. I try to cover as much as I can about the local High School and a little of the Middle School and Elementary School news in my hometown of Liberty, South Carolina.
I contacted the Communications Director for the school district. This is the person that typically handles "media contact" for the school district in which I live. This is what you should ask for in your efforts ~ Communications Director or "Media Contact".
My School District Communications Director stated that obtaining a "press pass" would most likely have to be a "school choice", but she would investigate opportunities for me.
So, I then placed a call to the principal of the local High School. The principal, whom I happen to know reasonably well, was happy to set up an appointment and essentially make me a Student ID with the ID badge system at the school.
(It also helps that I'm a school volunteer and have been SLED checked and volunteer trained.)
Here's what they decided on for the looks of my press pass for school events. 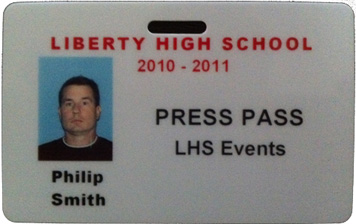 Obviously, I will have to renew this pass in 2012.
When I first started this website last September, throughout my first months of posting, I introduced myself to local officials - the Mayor and City Council at a City Council meeting and to County government at a County Council Meeting. This was opportune as the local papers cover both of these events as well. The "reporters" covering these local events were introduced to my website and my style ~ a local reporter, but also an active participant in the community.
I attended the Pickens County Delegation meeting in January of this year to introduce myself and my website to State government (area Representatives & Senators). At this meeting I asked State politicians to address three issues that faced Liberty residents. All three issues were resolved and I was able to report about it ~ gaining readers and respect.
I then attended a Senator forum with SC Federal Congressional Senator Lindsey Graham. I waited until afterward and introduced myself personally and handed his aid my business card and told him I would report about the forum on my website.
Coincidentally, I have friended every politician I can think of for my district on FaceBook and Twitter; both Democrat and Republican. I've also friended State and Federal politician and government agencies. Most, if not all of these politicians and agencies have not just followed me but recognized me and ATLIBERTYTOSAY.COM as a "news source". A few certain politicians read the site every day. Jeff Duncan, who is running for House Of Representatives in the 3rd District (covering Liberty), has given me specific time and invited me specifically or exclusively to events.
The Mayor Of Liberty, Brian Deese, seems to acknowledge my presence at City events and encourage me to report.
Most County and State politicians (at least the ones I care to associate with or report about) recognize me now and seek me out to chit chat a bit and I likewise seek them out to shake hands or get a few comments. A few recognize me first for questioning or in line with other reporters.
Over the past year, I've been friending local residents on Facebook and Twitter. Many of these "friends" are now contributing regularly to content and ask questions that develop easily into stories and investigations. When they see me at events (usually with an ATLIBERTYTOSAY.COM) T-Shirt on - they know why I'm there. A few are even happy to see "the man behind the words".
Although I doubt I'd get credit for such efforts - my City's Police Department, Fire Department, and City Government have better websites and each has a Twitter account to inform local residents. This, in turn, has assisted me in reporting to my readers. If I'm covering a story where these officials are, they know why I'm there.
As for the major news outlets, I've broken a number of stories for the Liberty area since beginning the site. WSPA TV Channel 7's Amy Wood has taken notice of a few stories.
My mission has been to be at the local events that news outlets are at, letting them see me, and allowing me to see them. I plan to more formally introduce myself to local media at an event later this year ~ I just wanted to get some experience and notoriety under my belt first. The site is well built out now and has a lot of great information.
I hate to visit a site that looks like it was just started a day, a week, or a month ago.
Your mission may differ from mine. You may like to be less personal ~ I like to be involved in my community. I am faithful to the phrase, "Knowledge is power." As I discover information, I like to share. I don't want to be seen as a journalist or a blogger. I want to be seen as the guy who knows things - the guy you can come to for answers and information.
As I have typed this, I've discovered the next thing I need in order to obtain a press pass; a broader, more general mission statement and the trust of my community. I have yet to visit a website of a major news outlet and not see "haters". Hateful comments that are directed at the editors and reporters are posted all over the websites of The Greenville News, The Anderson Independent, and the local TV news sites. National media outlets (like CNN, NBC, and CBS) are considered to be biased and are attacked regularly and stereotypically under the moniker of "the liberal media". Fox News is on the opposite end of the vitriol towards media.
The new mission statement:

Email ThisBlogThis!Share to TwitterShare to FacebookShare to Pinterest
: How Do I Get A Press Pass For My Blog, reference
Newer Posts Older Posts Home
Subscribe to: Posts (Atom)