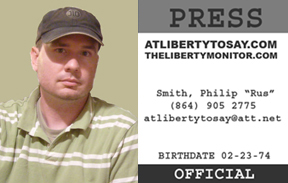 Here's a repost from my local news website ATLIBERTYTOSAY.COM that I thought more of my FIXYOURTHINKING.COM readers would enjoy ...
Do I need a "press pass" for my website and how do I get one?
I finally had to ask myself that question. As my website has grown from about 200-300 visitors a day to well over 3000 a day - I've started to realize that more and more people are actually turning to ATLIBERTYTOSAY.COM for news.
In turn, I've started to deliver more. I also have regular contributors now and regular readers asking questions that develop into stories. I've realized that other news sources are starting to aggregate the news I post here - like WSPA Channel 7.
A few days back, I realized that this site was so popular that it merited a major retraction when I copied some errant information from the Pickens County School District website.

_______________________
As I began to think of what I needed a press pass for, I had to ask those that would "be accepting them for admission" what I would need as credentials.
Many that I've asked are stumped. They've never thought of the question as no one has had to ask. They merely accept the facts, News 4 is News 4, The Greenville News is The Greenville News.
Some thoughts I've had run through my head are to just wear a News Channel 7 hat and golf shirt (which I have) and walk up to the gate with a picture ID clipped to my waist. But, that would be dishonest! I desire credibility and recognition ~ something that's hard to do (by perception) when you're not attached to a multimillion dollar organization.
Many errantly think that a journalist or reporter has to somehow have graduated from journalism school, be qualified or certified, or even has to be associated with a traditional media outlet like a TV or radio station or a newspaper. 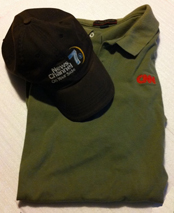 The thing is, there is no qualification! Sure, a journalism degree helps. Sure a big Channel 4 or News Channel 7 hat or shirt "looks" like you qualify ~ but it doesn't distinguish one person from another. NBC or CNN logos help. But, in the end, they are just logos.


With some, these logos have bad connotations. FoxNews, for instance, has a reputation amongst conservative republicans as trustworthy, but warmongering amongst democrats. I suppose one might want to becareful what their website or blog "logo" looks like - at least by perception.

_______________________
One person I've noticed that isn't from a traditional media source is Bobby Rettew. I graduated from Daniel High School with Bobby. He and I made roughly the same grades as far as I remember.
He went to Clemson and graduated in Mathematical Science and Communications. He runs a website that's well known for social media interaction. He's an Apple Computer user.
I never knew Bobby to be a writer. I did see him working before his current gig at a media company in Greenville on several occasions.
I audited a few classes at the University Of Georgia Grady School Of Journalism ~ known pretty well for their annual Peabody Award. I worked at a local radio station for a few months and I have worked for Apple Computer.
I've always been a writer. I've written in a personal journal since I was 10. I also won several writing awards while in school.
If legal analyst's blogs are to be believed, I personally secured "blogging as journalism" in some landmark litigation that I was a part of.
Bobby's presence exudes media ~ he carries around an expensive DV camera. Sometimes, when I've seen him covering an event, I've seen him in a multi-pocketed tan vest holding a tripod ~ the stereotypical presence of a photographer.
I do not exude media - I carry my iPhone and I wear normal, semi conservative clothes - usually a T-Shirt and shorts in the summer or a black mock turtleneck and jeans in the winter.
One thing is common to both of us though - we both ARE our work - we both fit the part. You would think Bobby reports and records and photographs for his company BobbyRettewLLC, just as much as you'd think my "looks and personality" and "equipment" matches my style of reporting on ATLIBERTYTOSAY.COM.
Bobby is a recorder. Bobby is great at what he does and he garners the respect he desires quickly. He's also earned a lot of accolades ~ one being that he filmed all the overhead shots of Greenville's "Get Google Broadband" efforts from a helicopter. Something, which is undisputed, an awesome effort and amazing job.
I'm an observer. I like to share my thoughts and opinions with others ~ hoping they become educated as I did while researching ~ even while I typed.
As I have typed this, I have discovered the first thing I need in order to obtain a press pass; a mission statement. It needs to be published and distributed to the School District, Local, County, and State Government, the major news outlets, and to the major local churches. Each of these is important and I'll explain why in Part II of this series.
Here is the ATLIBERTYTOSAY.COM mission statement:

My name is Philip Smith. I have lived in the Upstate of South Carolina since I was 4 1/2. I have always been an observer, but more so a participator. I have always enjoyed writing. I received my first "honor" writing a series of short stories that my friends in 2nd grade would literally beg me to deliver to them each week. I won a robot and a microwave in a national essay contest in 4th grade. I won the Ben Robertson Essay contest in 5th grade. I have kept a lengthy daily journal since I was 10. My family, originating in Liberty, South Carolina has a history of great writers. Ben Robertson, a cousin of mine, is famous for writing Red Hills and Cotton.  Red Hills and Cotton covers observations of the Old South. Ben Robertson was also a journalist and "southern reporter" for The New York Times. I am an observer and I desire to be a reporter for all things Liberty. I want to share with my community. I want to know Liberty South Carolina and I want to give back everything I learn. My mission is to share the news of Liberty. My mission is to live up to Liberty's welcome signs, "Where neighbors become friends."