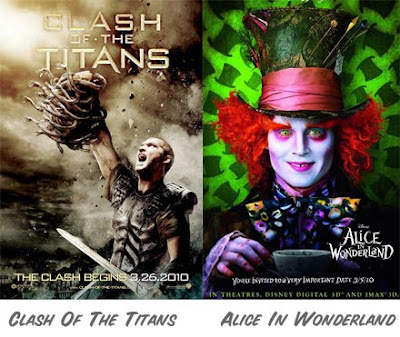 Over Spring Break I saw Clash Of the Titans (2010) on opening day with my son and yesterday I finally got around to seeing Alice In Wonderland (2010). Here is my review of each:

Alice In Wonderland (2010) is directed by Tim Burton, starring the only lead that is in a Tim Burton movie; Johnny Depp. I love Depp as an actor but he's become very constrained in the worlds of Burton. He's played so many diverse, can I say, weirdos in various movies that he's basically tapped out his talents. Depp's version of the Mad Hatter is a mish mash of his other roles as captain Jack Sparrow, Willy Wonka, and Edward Scissorhands - this may be on purpose somewhat - after all the Mad Hatter is mad and I suppose they wanted to portray him as having multiple personalities. The role just doesn't come off well and the make up in my opinion isn't convincing - it's just oddball.

If you've seen the Peter Pan (remake/update) Hook with Robin Williams then you've seen this movie. The plot is VERY weak - essentially making Alice forget her previous journey to Wonderland and rediscovering her past by reliving it in a similar way. Only this time, as a grown up, Alice can do the things she didn't in the "animated" version - such as slay the Jabberwocky.

I wasn't interested in this movie as I watched - I'm admittedly not a fan of the Alice In Wonderland tale. The imagery is frightening as is all of Burton's creations. I would in no way recommend this movie for your children.

I was really looking forward to this update of the classic Clash Of The Titans - of which I'm a big fan. The original seemed perfect to me - making the world very true to mythology and seeming very fanciful. The original also had a very unique story that kept you interested.

The new movie is quite bad. It's effects are top notch, but the creature design isn't nearly as innovative or fascinating as the original. The story is also intentionally set up to make movie goers question the role of religion and God(s) in man's life. The only update to the story that I liked was Medusa - I thought she very terrifying - even though you don't really get to see her face.

I would single Ralph Fiennes as particularly lackluster in his role as Hades. I'm a big fan of Liam Neeson, but his role as Zeus is uninspiring. He doesn't look like Zeus or act like you'd think Zeus would.

A lot of the movie seemed to be scripted just to be different from the original, but retain enough of the original elements just to appease fans. This purposeful script deviation confuses the plot and adds unnecessary elements that only serve to make the movie 20 minutes longer than it should have been.

The only positive thing I can say about this movie was actually a negative in the original - there's a quick 5 second scene where "Bubo: The Owl" is brought out and made fun of. I cracked a smile.