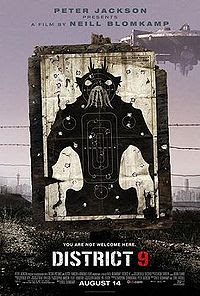 I finally got around to seeing the movie District 9 last night. I liked it a lot. I don't know if it deserves a spot in my top 100 ranking or not, but it was very enter- taining. It's symbolism on racial issues and the greed of large megacorporations is very well done. The special effects are also perfect - something that is an awesome achievement for such a low budget movie. Most of the the movie is filmed like Cloverfield - from a first person perspective. I would highly recommend seeing it when it comes to video on December 22, 2009.

The basic plot of the movie is:

In 1982, an enormous alien spaceship stops above Johannesburg, South Africa - seemingly stranded. After waiting weeks for any communication from the ship, an exploratory team cuts into the hovering ship and discovers a group of one million unhealthy and leaderless members of an insect-like alien race. The aliens are given asylum on Earth. The alien camp turns into a run down, poverty and violence stricken area. After demands from the people to stop their spread, the aliens are confined to a government camp inside Johannesburg, called District 9. The camp soon turns into a slum that resembles a third world outer city ghetto.

Approximately 25 years later, a private military contractor named Multinational United (MNU) is placed in charge of policing and relocating the growing alien population to District 10, a new camp about 150 miles away. MNU hires a likable and nerdy figurehead that can "show the people" how civilized the operation of the "eviction and transplantation" of the aliens transpires.

Very worried about the operation going smoothly, this leader finds himself in opposition to the military commander and the executives in charge of MNU. He also experiences first hand how the aliens have been unfairly ostracized and mistreated.

From the previews, this movie seemed like it was going to have a very high "gross factor". It ends up that a lot of the people blown up are done so in a comical way - in pure Peter Jackson (executive producer) form. I also enjoyed the subtle ghetto references - in particular - the aliens trading some of their weapons for sex with humans. <- No it's not as graphic as it sounds.