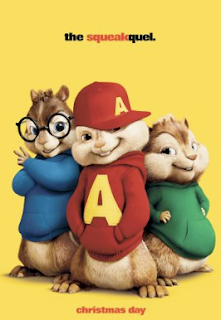 One of my holiday traditions is to catch up on a few movies ...

My son has been pretty excited to see two movies: Avatar and Alvin & The Chipmunks: The Squeakuel.

We went to see Alvin and the Chipmunks II on Thursday night.

I rather enjoyed the first installment of the live action translation to the classic animated series of cartoons. It was a well done homage.

This second installment however was lacking the same wittiness and seemed sort of rushed.

Alvin, Simon and Theodore (the chipmunks) now famous performing pop stars end up being "chipmunk-sat" by caretaker Dave's 25 year old nephew. The chipmunks take some time out to go to school. On their first day, they find out that the principal, a closet chipmunk groupie, wants the chipmunks to represent the school in a district talent show. Alvin and his two brothers unexpectedly meet their match when a trio of female singing chipmunks known as The Chipettes show up to compete against them. 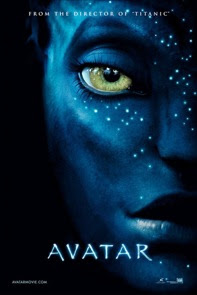 I didn't really have high hopes for this movie, it didn't really look all that appealing beyond the visuals to me. I had an idea that it would be yet another "environmental statement" type movie - turns out, I was right. Avatar lacked uniqueness in plot and instead tried to gloss over the borrowed themes with astounding visuals.

The plot of Avatar:

A paraplegic war veteran, is brought to another planet, Pandora, to acquaint himself with the inhabitants called the Na'vi. The 12 foot tall Na'vi have a unique brain which allows the transfer of thoughts (and actions) using a process called "Avatar". This unique ability has allowed scientists from Earth to grow human/Na'vi counterparts that are genetically linked.

Upon arrival, the soldier finds that "the Avatar project" is mostly about corporate greed. The intention of the program is to supplant or exterminate the "Na'vi" in order to mine for a precious metal - ironically called unobtanium. The soldier gains the trust of the natives of Pandora - only to find himself metaphorically - a puppet. A real bond is made with the Na'vi as they think humans are finally making an effort to understand them. He finds out that understanding the natives is understanding the corrupt nature of the human heart.

I read a short review of this movie that said it was a live action Ferngully. I agree. This plot has been used so many times and seems rather abused by Hollywood as of late.

Avatar ranks as the most expensive movie ever made with budget estimates at upwards of $460 million. That means the movie will have to make nearly a billion dollars just to recoup costs - something very few movies ever do. 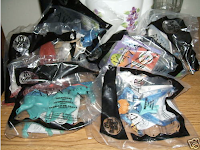 Also know that - although this film is being promoted to children via McDonald's Happy Meal toys - there is every curse word in the book in the film - including roughly a dozen times the Lord's name is taken in vain.