Sorry to post so many movie reviews, but the holidays are my best chance to catch up on movies I missed at the theater and to actually go to the theater with my wife and family willingly. 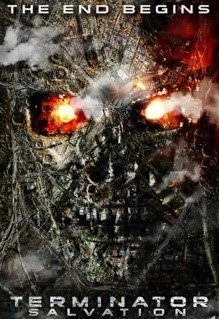 If you like the Terminator series of movies, you'll enjoy this installment. It seems to almost erase the timeline of the third movie Terminator 3: Rise Of The Machines and start fresh. It also seems to abandon anything that happened in the Sarah Conner Chronicles that aired on Fox.

The movie relies heavily on the audience knowing the plots of Terminator I & II - it also helps if you got to see the Terminator Experience at Universal Studios.

Terminator: Salvation starts with a convicted murderer being put to death and promised a new life.

We then fast forward to the year 2018, when he revives in a post apocalyptic world.

With a new lease on life, he tries to make sense of his new confusing surroundings.

He befriends Kyle Reese as a teenager. Kyle Reese is John Conner's father.

He finds out that his purpose in life wasn't to be terminated as a murderer - instead he is to continue a murderous life as a terminator - Model T-001.

The centerpiece of this movie is suppose to be Christian Bale - as in Batman: Dark Knight his "tough guy voice" is almost laughable - it's hard to understand as he slurs and spits words. I enjoyed this movie, but haven't liked Bale since American Psycho.

Sam Worthington is good in this movie. He seems to be the next big star as he was in Terminator: Salvation, Avatar, and plays the lead in the upcoming Clash Of The Titans remake.

Note: there's a fairly well kept secret about the ending of this movie that will be sure to delight you if you're a fan of the original series.