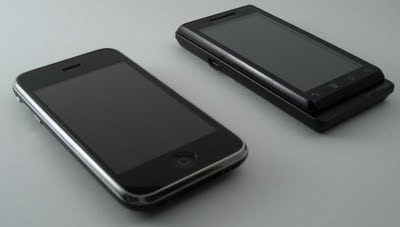 IF THIS EVER HAPPENED WITHOUT MY CONSENT TO FIX ANYTHING ON THE iPHONE I WOULD ENCOURAGE/JOIN/PROMOTE A LAWSUIT AGAINST AT&T!

How dare they fix something that I may not think is broken or is an exploitable hack that may be to my benefit without my consent or request to fix it?

Hey, you may get more coverage on Verizon - and you know why they have more coverage? They can control your phone like this.

[UPDATE] So here's where ENgadget's credibility comes into play - it appears as if there wasn't an over the air update after all - it's just a bug that "pops up" every few days due to a timestamp that the phone places with pictures in conjunction with the camera causing the camera to malfunction.

This is another reason I hate it when people quote ENgadget to me to prove their case - rarely can you count on them to give you a non sensationalist story - written solely for hits.

This said - this KIND OF THING wouldn't be beyond Verizon - and could very easily have been issued "secretly over the air" - this kind of control is not beyond Verizon. It just so happens they didn't do it this time. With the common outrage that has appeared in forums around the net - I'm sure they would consider thinking twice if they ever do decide.

Email ThisBlogThis!Share to TwitterShare to FacebookShare to Pinterest
: Verizon