AT&T Sues Verizon Over False Claims About Coverage In Commercial 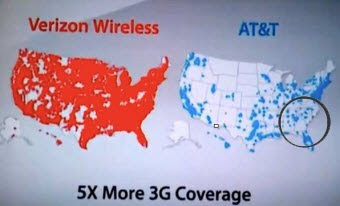 I would have loved to title this, "There's A Lawsuit For That" or "Can You Sue Us Now?" ... alas those headlines are not only taken - but it seems every Apple, cellphone, and major news outlet has already overused them.

I knew the commercial was making false claims just from my own state's depiction (South Carolina). The disclaimer at the bottom was also too small to read. You needed a movie screen and then a magnifying glass to see it.

According to AT&T's brochures - 3G coverage is much better here. Verizon's maps also don't account for recent activations - in fact - it appears as if the maps Verizon used are 1.5 years old. Since the launch of the iPhone (and most likely BECAUSE of it) AT&T has made huge improvements to their network. I just got 3G in my small town last week - and I've noticed nearly full coverage within a 40 mile radius of my home. Verizon's map indicates nearly zero coverage anywhere near where I live.

Verizon should learn that stating fact within a commercial may not be fact by the time its audience see it and its advertising department (coincidentally located nearby me) should have known the net would call them out on the claims.

2) In certain areas, such as my own, AT&T wireless operated under third party companies or MVNO's (Mobile Virtual Network Operator) such as Suncom Wireless. Suncom was purchased by T-Mobile in 2008. In MOST places in the country TMobile is on a separate band for the 3G wireless coverage - but in the south - they operate on the same band. AT&T & T-Mobile actually share a sort of data roaming agreement. Certain towers in my area (and I'm sure others) are "special towers" used to dole out signal (voice and data) to T-Mobile (former Suncom Wireless customers) and to AT&T (former Cingular customers).

Neither of these facts are taken into account with Verizon's "there's a map for that" maps.

Combined with the fact that Verizon used older 2008 maps where they DID have more coverage - this is the reason there's such a huge discrepancy.

Verizon is trying to "trick" all those iPhone customers that have complained about AT&T's poor signal. While I have had my share of problems with AT&T and had my share of signal issues - it HAS gotten better over the last year. Better than Verizon would have you believe.