My Corner Of the World Officially Gets 3G ... 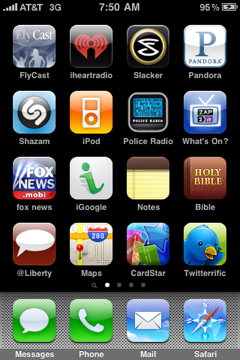 * screenshot of my iPhone indicating downtown Liberty reception of 3G

Wow! What a surprise! My iPhone internet connection has been very slow over the past few days ... the reason appears to be that they were upgrading the towers for 3G. Yep ... Liberty officially has 3G from AT&T.

Residents of Liberty closer to Norris were already receiving a decent 3G signal - from a 3G Tower in Clemson.
No comments:

Private Enterprise Can Do What The Government Should Not

Admittedly, Apple is in a much better financial situation that just about every company in the world - with record profits at the peak of a worldwide recession. But, here you have the answer to the "Healthcare Debate":

"In the midst of a heated national debate over legislation to provide all Americans with affordable health insurance, Apple will skip the controversy entirely and extend full-benefit medical insurance to part-time employees in January 2010. According to sources, the benefits now offered only to full-time employees, including those who work at the retail stores, will be offered to those working as few as 15 hours a week, which would include nearly all store employees. The insurance benefit will apply to employees who have at least one year of service with Apple. The change in coverage is significant, since American businesses have traditionally offered medical and other benefits only to full-time employees, and sometimes reduced benefits to those who work at least 20-hours a week. Apple has 16,500 full-time equivalent retail store employees, according to the company’s latest financial filing. It’s estimated the staff is composed of about 9,900 part-time employees who will be affected by the insurance change. Based on the average cost of medical insurance policies purchased by employers, the annual cost of extending medical benefits to part-time store employees could be at least $80 million a year."

Aptera To Be Eligible For Funding From Dept Of Energy 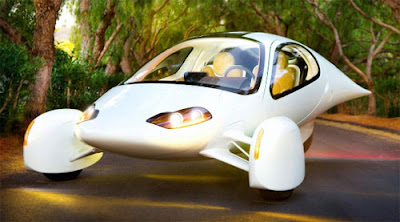 As many of you know, I follow Aptera news pretty closely ...

Following months of debate, Congress has approved a bill that will pave the way for three-wheeled vehicle manufacturers like Aptera to qualify for funding from the Department of Energy.

... Assuming the bill passes the President's desk, any manufacturer of enclosed three-wheeled vehicles that can carry at least two adults while returning at least 75 miles per gallon will be eligible for funding, though the DOE will still approve applications on a case-by-case basis.

[UPDATE] A reader tip reminded me that Obama did sign the bill ... and Aptera applied for and is expected receive additional funding from the Department Of Energy
No comments:

Email ThisBlogThis!Share to TwitterShare to FacebookShare to Pinterest
: Aptera

We sure are saving a bunch of money in schools by buying Dell ...

Last night I went up to my son's elementary school to view a Book Fair ...

This is the first thing I noticed when I walked in the door to the library: 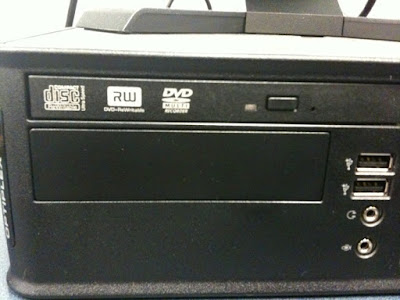 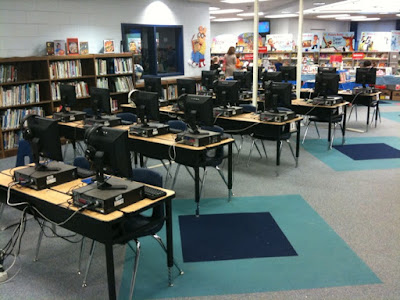 This is roughly 40 computer stations. As you can see every one of these computers (Brand New Core2Duo 2.16Ghz DELLs)has a DVD Writer installed. How many K4- 4th Graders are capable of burning a DVD? How many NEED to burn to DVD and could our school district have saved at least $5 per computer if they all just had DVD/CDRW combo drives instead of DVD burners?

I've heard the estimate that Pickens County got 1200 new computers - that would equal $6,000 in savings if it was just $5 per computer.
No comments:

Email ThisBlogThis!Share to TwitterShare to FacebookShare to Pinterest
: Dell, Education

If Apple Wanted Verizon They Would HAVE Verizon.

Apple has got to be considering an iPhone for Verizon

Apple surely must be considering signing up other US carriers for the iPhone besides AT&T (that singularity is why I don’t own an Apple phone). If they’re not, they should reconsider.

The main reason for this suggestion is: the number one complaint of iPhone users, in a recent analyst report, is AT&T - not the iPhone itself. The article goes on to hash this figure out a half dozen ways.

But this factoid from the article deserves a further look:

The most logical next choice for a US carrier is Verizon. But for that to happen, Apple must be willing to build an iPhone just for Verizon’s CDMA network. The other alternative is simply too expensive. About $1.78 billion to be exact.

That’s according to a report looking at the capital expenditures needed to deploy 4G, or LTE (Long Term Evolution) networks, issued Wednesday by Aircom International, a U.K.-based network consulting group. And that’s just for the first year.

Will Apple make an iPhone for Verizon’s network? I think it will, at least eventually. Until then, it will have the world’s most loved smartphone on a carrier that a lot of folks would like to ditch.

1) It won't happen on CDMA - the next gen LTE network is already starting to be built out with a good penetration in effect by the end of next year. I doubt seriously that Verizon is playing the AT&T game of "coming soon".

2) No one seems to have considered that $1.78 Billion is chump change to Apple's $34 Billion in the bank. What few grasp is that Apple's $34 Billion is with NO DEBT obligations and growing at a rate of $1 Billion + per fiscal quarter. If Apple were displeased enough with AT&T, which I think they might be, they would go halvers with Verizon and give them their money next summer. For a controlling stake, Apple would probably be willing to spend $2 Billion and make the network even better than planned.

3) Apple has done this with investments for both NAND memory and small hard drive manufacturing for iPod/iPhone use and for LCD production. Apple has also cooperated and invested in Intel for production of custom chips for production in the MacBook Air. I can't see why an investment in a data network (maybe that could be enhanced by their new North Carolina data center) isn't along these same lines.

To sum up ... if Apple wanted Verizon ... they would invest in Verizon's network and deployment and would do so with just 3 or 4 months profit. That time may certainly come next summer when AT&T's agreement comes up for renewal.
No comments: