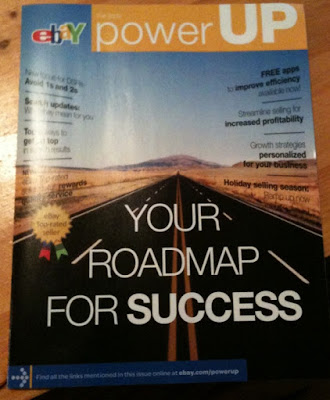 Last week, I got an "eBay magazine" in the mail ... sent from eBay telling me how to "optimize my sales".

It had a number of sellers with brief quotes about how they "liked" the new eBay changes.

I emailed one of the sellers "mentioned in the magazine" ... he said his actual email to eBay was far different and that he had sprinkled his posting with positive statements to get his point across - saying, "...a totally critical message usually falls on deaf ears."

What you can read below from SlashDot is what's really going on:

You can read the full article and all the comments here.

One thing that the story mentions is that sellers are complaining about their auction pages not rendering correctly after eBay enhanced its look. A lot of the "problem" is being blamed on sellers browsers - and - I'm sure you can guess - that anything besides Internet Explorer 7 or higher in Windows XP or higher is being blamed for the problems.

The changes implemented since 2007 have made eBay a miserable place for the "at home seller" ... eBay was more or less an "if it ain't broke, don't fix it" kind of thing. The ONLY change that needed to be made was lower prices and a negative feedback escrow that I've mentioned here.

I found the changes to listings and searches (and to a lesser extent, my sellers' page) quite distracting, without adding ANY functionality (maybe it's there and I can't see it).

That being said, I don't blame eBay or any other site for being unwilling to support IE 6. The rendering engine in IE 6 is more than 8 years old. The web has advanced significantly in that time while IE 6's renderer has stood still.

IE 6's wide deployment is holding back web development. I'm glad companies are finally realizing that they're being held back from offering new and compelling web experiences by supporting a very dated and in many ways broken piece of popular software.

But they blamed Safari, firefox, opera and mac is x and Linux

Oh I interpreted it that they blamed versions of IE prior to 7. I've not had a problem with the new layout using Firefox or Safari, other than it just being pointless.

Completely unrelated, but I always thought eBay would do a lot better if they moved to the traditional auction style of having the buyer pay the fees.