Apple's "Get A Mac" Ads Stream Genius ... Why Lauren Would Have Chosen A Mac If She Were A Cool Web 2.0 Person 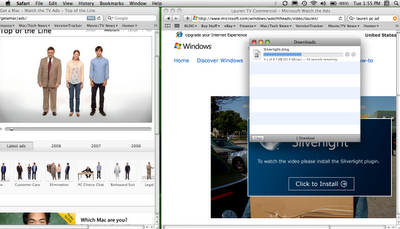 Apple's "Get A Mac" ads have no doubt been successful ... Apple has increased it's market share a few percentage points over the last 2 years since running them. Yes, a lot of the success has come from an iPhone/iPod halo effect and some has come from Vista dissatisfaction.
Microsoft, on the other hand, just announced decreased sales and had it's most disappointing quarter in the company's history. Microsoft has been running its ad campaign called "You Find It, You Keep It".
Posted on FixYourThinking on July 24th, 2009:

"We slightly adjusted the ads to reflect the updated pricing of the Mac laptop shown in the TV advertisement," a Microsoft spokeswoman said in a statement. "This does not change the focus of the campaign, which is to showcase the value and choice of the PC."

* Just a quick mention: Microsoft revenue fell 1 billion (with a "B") short of estimates the last quarter. Apple's recent earnings were ahead of estimates and was their best non holiday quarter ever.

Well ... I've noticed something else genius about the Apple ad campaign.
First, one can go to HTTP://APPLE.COM/GETAMAC/ADS and see one of the "Get A Mac Ads" in about 20 seconds with the average broadband modem.
If you go to http://www.microsoft.com/windows/watchtheads (Microsoft's Laptop Hunters Ad Page) ... which is a lot to type by the way ... you'll instantly notice that you must install a program called Microsoft SilverLight to watch the ads.
Now, I'm not sure if I'm saying this with complete certainty, but Quicktime comes as a standard installatiion on most all PCs and Macs. (I know it comes on all Macs.) This means that one could start watching the Apple ads right away, while the Microsoft ads require a few extra clicks to install SilverLight and at least an extra minute to even begin watching.
Yeah, yeah ... you could go to YouTube (which uses Quicktime compatible codecs) to see both ... but that's not where searches lead you. Apple pays for the top spot in searches for the keyword "Get A Mac". Microsoft pays for the top spot for "Microsoft Laptop Hunters".

Another genius decison by Apple, whether conscious or not, lies in the simplicity of the ads. The "Laptop Hunter" ads have situations on streets and in stores with complex backgrounds. The Apple "Get A Mac" ads have white backgrounds and usually have simple movements, two people, not a lot of color or clutter ... this contributes greatly to the Apple ads streaming (or downloading) quicker and contributes to Microsoft's ads actually being occasionally choppy. More data bits must stream for the Microsoft ads.

Just thought that was interesting ...

Email ThisBlogThis!Share to TwitterShare to FacebookShare to Pinterest
: advertising, Apple, Get A Mac

"Quicktime comes as a standard installatiion on all PCs and Macs"

No, but for what it's worth, Windows doesn't include Flash by default either, meaning YouTube also requires a download. However, at least in Windows 7 (and possibly Vista) SilverLight is a recommended download in Windows Update.

This means it is far more likely for a Windows client to have SilverLight than QuickTime.

"http://www.microsoft.com/windows/watchtheads/video/lauren/ (Microsoft's Laptop Hunters Ad Page) ... which is a lot to type by the way"

Actually, it's http://www.microsoft.com/windows/watchtheads/ to get to the same sort of landing page that your Apple URL goes to. But as you know, almost no one is going to get to either of these pages by typing out the URL. However, where you should be giving Apple credit is that when you go to apple.com there is a link directly to the ads -- microsoft.com offers no such link.

"One other genius decison by Apple whether conscious or not lies in the simplicity of the ads. The "Laptop Hunter" ads have situations on streets, in stores with complex backgrounds. The Apple "Get A Mac" ads have white backgrounds and are usually have simple movements, two people, not a lot of color or clutter ... this contributes greatly to the Apple ads streaming quicker and contributes to Microsoft's ads actually being occasionally choppy. More bits must stream for the Microsoft ads."

I'm going to tackle this one in reverse order. Streaming video, and the codecs involved are incredibly complex. In the case of SilverLight, it is designed to adapt to the bandwidth available, where as QuickTime is truly just streaming bits. To suggest that Apple's ads stream better because of the composition is incorrect. Composition does play a part in the bandwidth needed, but in general is a very minor aspect.

Now for the content of the ads. I think these ads are targeted at different but sometimes overlapping demographics. I think Microsoft's ads are saying "You made a good choice when you bought a PC, now, go buy another... there's bunches of them and they're cheap" where as Apple's ads say "next time you're thinking about buying a computer, check us out, you won't be disappointed."

If Apple were to adopt Microsoft's slogan it would be "What do you want to do today?" Because no one wants to "go" anywhere. Every time I hear "Where do you want to go today" I immediately think "not to work!"

I think that the only thing I liked about Microsoft's ads was the fact that Lauren was cute, because Microsoft's products are anything but!