A Trip To The Moon or A Day w/ Steve Jobs: An Idea About How Steve Jobs Could Take One Small Step As A Man To Help All Of Mankind. 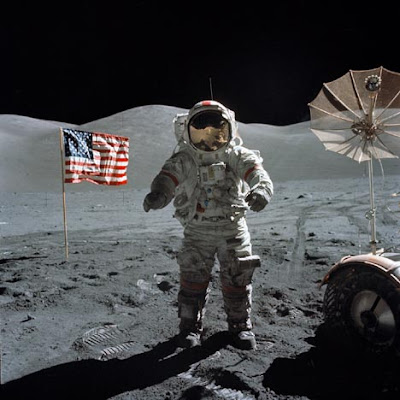 marks the 40th anniversary of a man landing on the moon.

We all know the famous first words quote from astronaut Neil Armstrong,

"That's one small step for man, one giant leap for mankind."

To me, that day, would be invaluable ... to witness just one day of his life - to learn even the smallest of things that makes him unique in the business world would be a dream come true to me.

I'm a guy who's a capitalist and salesman by nature, but not a used car salesman. I think integrity and compassion are integral to the personality of the salesman. I also think knowing what people want is key to being a great salesman. I've always had that knack. It's one of the things that keeps me involved with Apple Computer products. I know that it's what most people want - all of them just don't know it.

"A lot of times, people don't know what they want until you show it to them."

There's an opportunity here ... for a man (Steve Jobs) to make as huge an impact on mankind as the moon landing.

Warren Buffet has auctioned off a day with him for charity for the past years.

Here is a link to this year's auction for LUNCH w/ WARREN BUFFET auctioned off on eBay.

I propose that Steve Jobs auction a day with him, no holds barred (only the signing of a non disclosure agreement) for charity. Highest bidder gets the day - the National Center for Cancer Research gets 100% of the money - and 100% of that money focuses solely on pancreatic cancer.

At first I thought eBay would be the best venue - like Buffet's auctions ... then I considered all of the media attention this would get - it would be best for bids to be placed directly on APPLE.COM. One could use their AppleID to bid. It would be relatively simple to set up something such as this. Apple (& Jobs & NFCR) should get all of the attention for this - not eBay or anyone else.

It shouldn't be sealed bid - it would be awesome to see who was bidding and how much and to see the bid increase exponentially during the process. It would be interesting to see well known CEOs and small business leaders get publicity - telling the world (through the media) how much they'd love to do this. Maybe there will be some enterprising CEO that would win the bid then give the opportunity away to an uncommonly wealthy person, maybe an employee, or a customer, for their own publicity.

I see the potential for raising millions for a good cause - one that is personal to Jobs - personal to me.

In 2002, my first cousin died of pancreatic cancer. Unfortunately, he didn't have the rare, treatable form Jobs now has in remission. "Little Jim" as everyone in the family called him, once diagnosed, was given the prognosis of only 4-5 months left to live. It was hard on the family to see him get worse - especially his children. He tried a lot of the holostic treatments to extend his life and ease the pain. Being in an upper middle class income as a nurse with a good health care plan and having a wife that was a Pharmacy Technician was a big help to their research and ability to cope with the problem. His funeral was the day after my 28th birthday, on February 24th, 2002. Ironically, this is Steve Jobs birthday - February 24th. Also rather ironically my cousin, was born in 1955 - the same year as Jobs. If my cousin was alive today, he would be 54 like Jobs. He would be able to see his son graduate from college and his daughter graduate with her Masters Degree in medicine this year.

This is one small thing, one man could do; for the better of all mankind.

I see it as a great opportunity for Jobs to impart some wisdom before he leaves us - whether unexpectedly, tragically, or many many years from now naturally. In any case ... it would be the chance of a lifetime and an opportunity to contribute a wealth of knowledge to a lucky someone and a wealth of research funding - increasing the luck for those with pancreatic cancer.

I'm not sure which would be the most dangerous, traveling to the moon and back, or spending the day with Steve?

Personally, if I knew I would return in one piece, I would much rather go to the moon, but your idea of Steve doing what Warren Buffet does, giving people the chance to bid on spending a day with him is a good one.

The big problem, of course, is that we poor and ordinary folk are out of the picture. I certainly can't afford to spend a couple of million bucks on anything, let alone to spend the day with Steve Jobs. But if I could, I know it would be a most memorable experience.