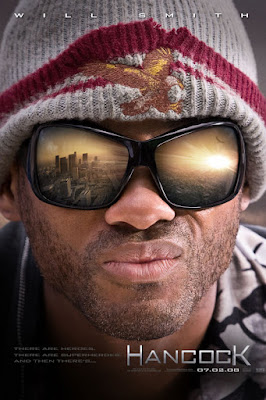 I finally got the opportunity to see the movie Hancock during a free preview this past weekend on DirecTV :

I had wanted to see this movie when it came out, but the stars never aligned for me ... c'est la vie.

Boy, am I glad I didn't pay money to see it.

About the only thing that kept me interested was the special effects and in places it looked like they ran out of money and had to add a few flying shots here and there - the quality of the flying sequences effects is comparable to the 1979 Superman.

One of the things I like to look at is box office totals vs production costs:

Hancock did very well - it's budget was $150 Million. This is obviously an instance where Will Smith was a large part of the reason it did so well. It has the "I'll see it because it's got Will Smith in it" factor.

The story centers around a mysterious homeless drunk (Hancock played by Will Smith) who has super powers. He's often called upon to save the day, but usually ends up causing millions of dollars worth of damage and public outcry is usually greater than the call for help.

The plot kind of gets lost and mixed up when a character tries to explain Hancock's powers. The references to angels and Gods muddies the waters of identifying with the characters. What is he? An Angel? A God? Demon (or fallen Angel)? An alien?

The ending will have you asking, why didn't he die - as it's established that he can die and his kind is all but gone.

I was surprised by the amount of cursing - especially the swearing - by Will Smith in the movie.

I mentioned that to my wife, adding that I thought Will Smith was pretty religious. She reminded me that Smith was a Scientologist. I had forgotten about that and remembered that he tried to deny it. After a quick Google search I found he's made several hundred thousand dollars in donations to the church of Scientology.

It's almost like, if I'm watching a movie about the mafia, I expect blood and swearing.

This movie had children in it and a lot of the cursing seemed out of place.

If you like Will Smith, he's very out of character here, and I don't recommend it.

If you can find the DVD for a really good price (say $5 or under) it may be worth it to see the alternate ending.

Thanks, I'll take your word for it and save my time and my money and forget about this one.

Yet another lemon of a movie....