Is there an adapter that goes from USB to Firewire DV? 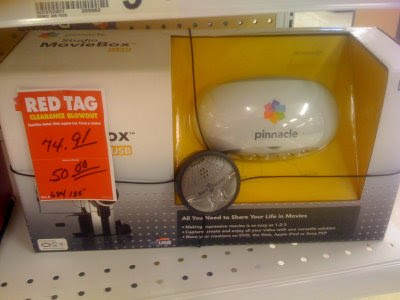 Apparently this interface from Pinnacle does just that ... it looks like everywhere I go these are on clearance.

The connection is made via USB 2.0 - the little white breakout box you see (which is Windows compatible only) has RCA, SVideo, and FireWire 400 DV - which I assume can only be used for video from a camcorder that uses a FirewireDV interface.

The box says Windows XP - so I guess Mac users could use this in Bootcamp, but I doubt it could be used in Parallels.

If I had some spare change I'd grab it and test it out.

As a side note ... I've also seen a Firewire to Ethernet converter to share video over a network but the adapter has to serve through a PC as well.

Email ThisBlogThis!Share to TwitterShare to FacebookShare to Pinterest
: Firewire to USB Converter

Just what I could have used a little while back!

This company also sent me a link: