What should Palm have named their iPhone competitor; the Pre?

Well ... as some of you know ... this site has its roots with the infamous Jack Campbell.

I've always considered Jack (no matter how controversial) to be a genius at marketing and product design. One of his finest examples was a product called The SafariPod.

Here's one of the press releases from MacDailyNews:

The SafariPod was produced somewhere around the mid to late 2006 timeframe as "a hand carved wooden dock" in the shape of an animal - think elephant, lion, giraffe.

Here's an example of one: 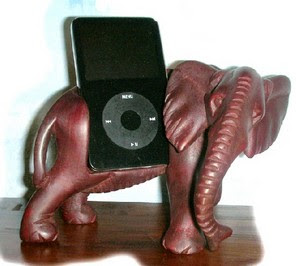 I never understood why Apple didn't publicly announce litigation against Jack Campbell over this product ... maybe it was because they didn't have a case - it truly doesn't infringe on Apple's registered trademarks. It does go against Apple naming policy for approved developers ... but hey ... when did Jack ever go by something that had to be "approved" or "follow the rules".

While talking to my best friend on the phone about the news that the Palm Pre was syncing up as an iPod and therefore able to connect nicely with iTunes - I quipped that Palm should have named the Pre- "SafariPod".

The beauty of the name SafariPod is that it infringed on two of Apple's copyrighted names yet infringes on neither - GENIUS!

What I'm getting at is that Palm could argue that an Ï-POD (pronounced E-POD) was syncing and NOT an iPod ... It could say iPod, but not mean an Apple (or HP) iPod - it could infringe on Apple's name that they rigorously and sometimes ostensibly litigate in honor of. It could mean you take it with you like a tool on an adventure - hence the "Safari" part of the name.

Palm could have created a huge buzz - even bigger than what the Pre has already gotten ... because the Apple blogosphere would be discussing it ad nauseam - and that chatter would leak into the mainstream press.

Lest we forget ... Apple had this controversy as well ... Cisco sued Apple (but later settled) over the iPhone name.

I have a few friends that haven't heard a word about the Pre. I don't know of anyone who hadn't heard about the iPhone - even a month before its announcement in January of 2007.