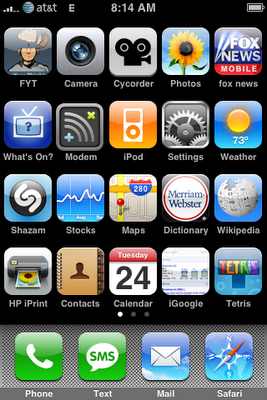 Part I: Jailbroken And Worth Notin'

I thought I'd give a quick review of all the applications on my iPhone. I consider myself an advanced but typical iPhone user. I have tried very hard over the last year and a half since I've had my iPhone to consolidate and simplify a lot of my life. The iPhone has literally changed and improved my life with better organization, instant education, and control and management of my personal information.

First, I suppose I should disclose that I have my iPhone "jailbroken". I will expand on the reasons why in this review.

Instantly you'll notice something quite different about my iPhone home screen in the picture above ... I have five columns and four rows of icons for apps on each page. This is accomplished with a jailbreak app "FCSB Toggle". This has reduced my pages of apps from five to two and a half (with the last 1/2 page being very unfrequented apps). You might think it's crowded on the screen, but I like the accessibility ... particularly first page access to frequently used apps. I have 5 more apps that I use regularly - getting four of them on the first page saves an ounce of hassle.

Second ... you probably notice that I have an AT&T logo instead of just the words "AT&T" next to my signal strength meter. This is small touch that I really like - I missed that from my Nokia days.

My wife, a recent iPhone convert, is currently using and loving several apps like CardStar and Ledger that I don't use ... but will most likely get soon. Cardstar is an "on iPhone" loyalty and membership card consolidating app. This eliminates the need for key fobs and discount cards from grocery stores, libraries, etc - reducing clutter and accidentally forgetting the cards. She also has a checking & savings account balancing app called Ledger - so far she's really enjoying it and has started to use it in conjunction with the Mobile Banking App - ridding her of the need to carry a bulky checkbook ledger and allowing her to execute bill paying services right from her phone. She can pay most of the utility bills this way and all credit card balances with this app.

Contained within the first two rows of my home screen you will see two other jailbreak apps.

On the first row (in the picture above), you can see an app called "Cycorder" - this is a FREE video recording application for the iPhone - this is one of the enticing apps for jailbreaking your iPhone and is specifically made free TO PROMOTE jailbreaking. I honestly haven't used it that much, but I have used it. In my opinion, pictures say a thousand words, but video is understood by millions more. It does a decent job recording video at 15 frames per second. Standard definition television is 24 frames per second. The video doesn't look choppy at all and the iPhone (if held properly) records audio during video recording very well. There is also a paid "jailbroken app" called 3G VideoRecorder that has YouTube upload options and no advertisements. It is also very polished - while Cycorder is kind of crude in appearance and contains in-app advertisements. I used 3G VideoRecorder for the 30 day free trial, but didn't think it was worth the $30 for a full license.

On the second row, you will see another jailbroken app called "Modem" - this is the second application enticer for jailbreaking one's iPhone. I don't have this app to access the internet as my sole means - I rarely use it. I do like that I can have it in case of an emergency - and I do have internet access emergencies. I bought a license for "Modem" from the Addition website for $9.99. I have to say that this application is the worst application I have on my iPhone. It crashes, it has a very inconsistent connection, and is totally unreliable. I'm a very advanced network manager - I know how to tweak the Mac OS - this app just flat out sucks! That's putting it mildly. Last month I asked for a refund and got it the same day with no response other than a refund to my Paypal account. This only strengthened my desire for a refund as there is absolutely NO TECHNICAL SUPPORT and if I were a betting man I'd say the devloper doesn't even read customer service emails - he just pays attention to refunds so as not to draw ANY attention to himself or have any scuffles with Paypal, Apple, or AT&T. According to various sources around the internet - iPhoneModem has pulled in over $500,000 for its developer.

I also have a version of MadLibs for jailbroken phones that downloads free Madlibs from an online database. These are fun to have as a time waster while waiting in line or in a doctor's office.

The last jailbroken app I have is SpoofApp. This application allows one to spoof or fake a caller ID. It comes with 5 free minutes of usage - which I used a minute or two to test and pretend I was a different person. I thought this app might come in handy one day - for what other person than a practical joke remains to be seen. It's kinda scary that one could do this.

I'm currently at the beach ... I'm working on the rest of this review and a review of my beach trip. More soon.