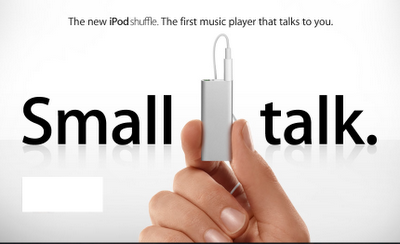 A favorite line of mine from the movie The Shawshank Redemption:

"In 1966, Andy Dufrane escaped from Shawshank prison. All they found of him was a muddy set of prison clothes, a bar of soap, and an old rock hammer, damn near worn down to the nub. I used to think it would take six-hundred years to tunnel under the wall with it. Old Andy did it in less than twenty.Oh, Andy loved geology. I guess it appealed to his meticulous nature. An ice age here, million years of mountain building there. Geology is the study of pressure and time. That's all it takes really, pressure, and time."

In this part of the movie, the narrator, Red (played by Morgan Freeman) is giving a metaphor for how long it took for Andy Dufrane (played by Tim Robbins) to break out of prison - digging through the prison wall with a rock hammer over 20 years.

"All told, the cost of the shuffle’s components, the headphones, and the packaging it ships in comes to $21.77, according to iSuppli’s estimates. That’s about 28% of the device’s retail price."

Apple engineers and product designers love their jobs I'm sure, but don't do their magic for free. These iSuppli estimates treat Apple engineers like street magicians.

iSuppli estimates and analysts analysis of these estimates always make it seem like Apple is just rooking anyone who buys an Apple product. None of these estimates or analysis account for advertising, graphic design, and most importantly the time and pressure under which many Apple engineers took to make such an innovative and beautiful product. Apple's margins have historically been around 30% - so these iSuppli estimates mean nothing. It only matters in products like the Sony Playstation 3 where component costs are above the retail price - then there's cause for concern to ... stockholders.

"It only matters in products like the Sony Playstation 3 where component costs are above the retail price - then there's cause for concern to ... stockholders."

Selling at a loss is bad. Selling at a profit is not. And since Apple's profit margin is a matter of public record these reports that imply a margin Apple cannot possibly be getting are silly.

Meanwhile, the profit margin on Windows and Office are HUGE, but you never see any articles about that.

Another analogy ... Andy's rock hammer only cost him a pack of smokes (cigarettes) but it was a lot more valuable than that. ;-)