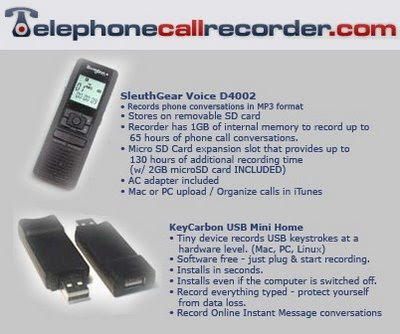 By far ... the most hit portion of my website is:

I get roughly 2000 hits a week on this one page and traffic has been steadily increasing as it's gotten higher and higher in Google searches.

I love maintaining this reference .... and I particularly like answering various commenter's questions.

Because I wished that all the knowledge contained was around years ago. Over the years, I've been threatened by people (including attorneys) trying to say they'd sue me if I recorded their conversations. I've also been told that I didn't understand the law. Well ... not any more. I have reasearched EVERY state, researched case law, consulted with attorneys, and read just about every reference I can find regarding cellphone and land line recording of conversations.

Many people I've spoken to, including my wife, wish they had known me when they had problems with an ex. Most lawyers, most police, most judges, don't know the law or interpret it incorrectly. I've found quite a few attorneys using my reference in court cases ... I even have had a judge use the reference in a ruling because it is so well documented.

I can record ANYTHING I wish - laws may prevent me from using this information, but it is ALWAYS up to a judge to allow ANY evidence as admissible whether obtained illegally or not. That being said ... know that a sneaky attorney could call for a mistrial because you submitted evidence improperly or illegally. Read ALL of the comments below to see where I have thoroughly discussed this scenario.

To clarify; know that one can record anything without notification - even in a 2 party state. It is a threat to use or actual use of these recorded conversations to defame, frame, or harass where these laws come in to play.

This is why I decided to team up with a website called TELEPHONECALLRECORDER.COM to make access to certified easy to use call recording devices.

I'm not trying to pitch something I don't believe in or don't use myself. I truly want people to use my reference and follow the law - using the right equipment.

I record ALL of my calls that regard money or family. Using NON COMPUTER hardware is easier to present in court and less suspect for tampering. Plus it's just easier to use no matter how awesome the interface or the operating system on a computer. With a call recording device such as the one featured here from TELEPHONECALLRECORDER.COM you can organize all your recorded phone calls in iTunes very easily. The SleuthGear Voice D4002 has the added benefit of having a microSD slot - making archiving of your conversations even easier.

I also would like to feature TELEPHONECALLRECORDER.COM's USB Keystroke logger that works on a Mac or PC.

I've been asked at least a half dozen times over the years to help retrieve AOL Instant Messenger logs from a computer of a suspected cheating spouse.

These devices aren't cheap ... but know that my hourly rate is $100+ and I'm inexpensive for a computer technician. Why not have a device that you can use in the future and keep some of the data private and keep some of the embarrassing evidence to yourself. A keystroke logger is very stealth and wont be recognized, especially on a desktop computer.

Email ThisBlogThis!Share to TwitterShare to FacebookShare to Pinterest
: Can I Record My Cellphone Conversations?, Is It Legal To Record A Telephone Conversation, Recording Phone Calls Laws