Buying a refurb iPhone from the official AT&T website for $99.00 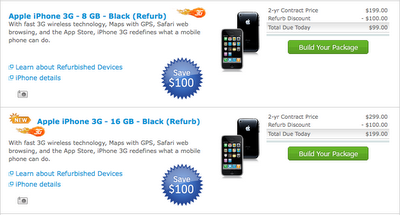 I switched my wife to an iPhone .... my 8th Verizon convert since the beginning of 2009, by the way.

I got one of the AT&T $99 refurb deals for the 8GB version. I got her to use the referral that appears on this site and it kicked some money back to me.

I started preparing my music library for her to sync to her iPhone. As I was going through my songs in cover flow ... I noticed a lot of duplicate album artwork. So, I named all of the albums (something I've never done) ... it took me a few hours. Wow! By removing the duplicate artwork, because albums had extra words in the title or artists names were spelled like "Michael Jackson" instead of "Micheal Jackson", I saved nearly 200 MEGABYTES!!

If you have a lot of music ... I'd make sure you don't have the same problem. Some of the MP3's on my computer are 13 years old and either I personally added the artwork and created the ID3 tags or iTunes mistakenly added the wrong information in an "Album Art Search".

You may want to get ready to re-tag your mp3's again, as "Michael" is the correct spelling!

You are correct ... But I don't think I'll have any more Jackson downloads. I had the same issue with Michael Buble

I just got myself a refurb iPhone from the AT&T website last Thursday. I figured they would atleast ship it out on Friday, but no, they didn't ship it until Monday. Two day priority shipping I received it on Wednesday. Wednesday I got the phone and called AT&T on my old phone to setup the number port from Sprint. After getting all that situated I power up my iPhone only to find that the Home button was broken. Didn't work at all. After 4 hours on the line with Applecare they wanted me to ship the phone back and wait 4 weeks to get it back. After a long talk he said I could take it to an Apple Retail Store which the closest one was 3 hours away. So the next day I made the drive down to get it fixed. Walked in and they took care of me within 15 minutes I was ready to walk out with my working iPhone. Although the Apple Store took really good care of me, I would have to say I was very upset with the quality of service I received from AT&T as well as the broken phone. And being as I run my business through my phone I can't be without it for 4 weeks. If I hadn't ported my number out already I would have sent it back and kept using my Sprint account.

Well .. that could have occurred with a new phone also.

Just remember - it is AT&T that is refurbing here - NOT Apple.

It seems that AT&T is willing to offer this sale more.

At least you got to visit an Apple Store!