My Circuit City Story; Or Why I'm Not Surprised They Are Going Out Of Business

As many of you have seen ... electronics retailer Circuit City is in bankruptcy liquidation because they couldn't emerge from bankruptcy. Good riddance!

I have a short story to tell about my Apple rep days with Circuit City:

Back in 1999 ... I was serving as a regional Apple Retail Rep for the South Carolina, Western North Carloina, and Eastern Tennessee area. My job was to make sure employees at Circuit City and Sears stores were educated on Apple products. I also stocked brochures, maintained and cleaned displays, and occasionally did "demonstrations" called "Demo Days".

One day in May of '99 - I walked into a Charlotte, North Carolina Circuit City for the first time. This Circuit City was very old and dirty on the outside - it looked like a converted warehouse building. If I'm not mistaken, it served as a regional distribution hub. The entrance was a long, dimly lit hallway that was separated by two sets of auto-opening slide doors. In the corridor between the sliding doors were displays of products. On one shelf was an orange "Gumdrop iMac". There was a mismatched aqua iMac keyboard and white generic PC USB mouse with it.

Right as I went by it, I saw the screen flicker as if shorting out. I heard a strange sound and then started swatting around my face. I heard the sound of gnats buzzing in my ear. Then, I saw several swirl swirl swirl and hover towards the back of the iMac. It wasn't gnats - it was FLYING ANTS - A WHOLE COLONY OF THEM living in the handle portion of the orange iMac. 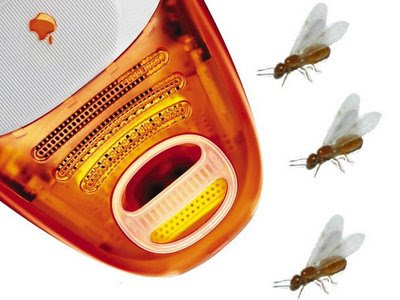 I notified an employee immediately - before introducing myself as the new Apple Rep.

After telling him who I was, I asked that they take the iMac down and put up a proper display. After waiting 15 minutes without action; I went to management. Management apparently was "aware of it" as well and thought it had the same coolness factor. After discussing it thoroughly with the manager, I called Apple at a "Rep hotline number". With a lot of loud "No way's and WHAT!!!'s" I was instructed to take the iMac down myself and get it outside of the store immediately - with caution. While doing so, I handed my cell phone over to the manager who was obviously getting a good grilling.

In my experience ... as an Apple Rep ... at Circuit City Apple computers were treated with a "freakish, we hate those" look. Apple computers, even Cubes (which Circuit City carried) were often placed next to WEBTV units and most times placed on lower shelves within the stores.

From what I have been told ... the Apple program in CompUSA stores was the most profitable piece of real estate in the stores and even kept a few stores open. Best Buy stores see a huge part of their profit from the Apple Store within a store concept. It's obvious that if Apple computers are sold with honest efforts - they sell well.

The Circuit City/Apple program was ended abruptly next year.