In these "times of trimming our budgets" I've found two really unique ways to save money. Actually, not to gloat, but I've been using both of these "cost cutters" since about 2000.

First ... if you are an active or retired military officer, policeman, fireman or have a father, mother, or parent in-law that serves or has served ... you qualify to get USAA insurance for your home and car. Automobile insurance through USAA is HALF of Progressive, State Farm, AllState, and Geico.

I've told a lot of people about USAA insurance and most people - even military personnel don't know about it. They are the ONLY (as far as I know) non profit insurance company. Since my father and brother have both served - I qualify to get the awesome rates that USAA gives.

I've had people tell me that they don't believe me when I say I pay $280 A YEAR for my auto insurance. I do have a high deductible and I dropped collision & comprehensive last year (because my car has a junked title). BUT - before I raised my car insurance deductible from $500 to $1000 and dropped collision and comprehensive - my rate was $427.50 A YEAR. I have a good driving record which helps and I also have completed two separate driving courses. My car - A 2002 Suzuki Vitara, is also on insurance lists Top 10 safest vehicles ever made. <--- After the Suzuki Samurai rollover lawsuit - Suzuki allowed Consumer Reports (the defendant in the lawsuit) to help design their next generation SUV. The result was the Suzuki Sidekick - which became the Suzuki Vitara - which shares identical bodies with the GEO and Chevy Tracker.

It is impossible for any auto insurance company to give you a better rate than USAA. Plus, once joined, you cannot be dropped unless you fall into SR-22 status.

If you combine your insurance with a home insurance policy (which I receive this benefit from my Dad's home) - you can get an even further discount. Home insurance rates are equal in value - roughly half of all the major insurance companies. 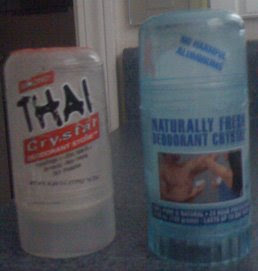 My other money saving tip is - buying Thai Crystal deodorant. What I'm about to tell you will sound unbelievable. I have had the above deodorant for FOUR YEARS. I put it on every day. i don't have complaints about body odor. I'm realistic when I lift my arm and sniff and I do not smell at all. I got my wife to start using it and she recently had to replace hers because she dropped it and the blue container you see above busted. It costs between $8-$15. I got mine at a local health & vitamin store called Creative Health. You can also purchase the "blue brand" you see above at Walmart. I use Apple scented body splash and Delicious by Donna Karen as "my scent". I put a small amount of Delicious in the top of the container of my Thai Crystal deodorant each month to refresh it. Before I started using Thai Crystal deodorant I was buying roughly 1 spray deodorant bottle a month. This has ended up saving me about $40 a year.

One thing I forgot to mention that both my wife and best friend reminded me about:

Don't forget that crystal deodorant doesn't contain potentially harmful aluminum derivatives which is the reason that I prefer this type of deodorant.

Email ThisBlogThis!Share to TwitterShare to FacebookShare to Pinterest
: Automobile Insurance Saving Tip, Easy To Be Green

Don't forget that crystal deodorant doesn't contain potentially harmful aluminum derivatives which is the reason that I prefer this type of deodorant.

Nice post
Everyone can save money in small and seemingly insignificant areas if you know how and where to do it.
These are all great ideas
Great tips! I’ll be coming back to learn more about saving money!