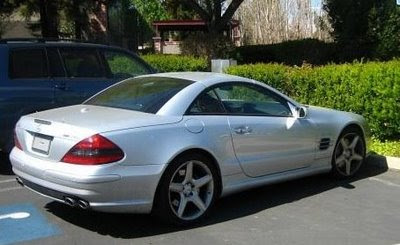 [FYT NOTE: This story doesn't actually tell you that celebrities in California can obtain these for additional privacy.]

[UPDATE] I misstated my note above .... what I meant to express is that certain celebs are given exceptions to the license plate display policy. I know for certain that he does NOT have a barcode license plate. I would also posit that none of these pictures ever show the FRONT of his car. He may very well keep the tag on his seat beside him. Take into account that Jobs does not drive a lot and his house is VERY close to the Apple campus and downtown San Fran.

He's not being allowed to do anything special and he's not breaking the law.

I asked my aunt in California and she said some certain celebs that require an extra measure of privacy are allowed to do this. She says Shwartzenager did it before he was governor.

2) He could carry the tag in the car. If pulled - the exception may be noted with the DMV

With all this being said, I'm not sure if this issue is now providing Jobs any security at all. It seems like it may be piquing interest in stalking him. This is an incredibly irrelevant issue and I'm shocked at the levels people are going to - invading his privacy and liberty.

[FYT NOTE: This story doesn't actually tell you that celebrities in California can obtain these for additional privacy.]

Are you sure about this? Many sites picked up this story and actually quote the California statute relating to license plates and no mention is made of this. In fact, several commenters have even pointed out that this VIN barcode is put on by the factory and EVERY Mercedes has one there, and many other manufactures put a VIN barcode in the same place.

Do you have a source for your claim that celebrities in California can get away without a license plate?

I'm not saying he has a barcode plate ... some celebs do not have to have rear plates though in CA. I think if you google you'll see other pics of the front with a plate that says something ...

He's not being allowed to do anything special and he's not breaking the law.

I asked my aunt in California and she said some certain celebs that require an extra measure of privacy are allowed to do this. She says Shwartzenager did it before he was governor.

That's very odd, and conflicting with the law as it is written. Especially since a member of my family works in Hollywood and could not confirm this.

I read about a year ago that the CEOs of Google use a different car every day for privacy and sometimes even switch cars in-route. Which sounds just about as weird as the no license plate thing. Especially since driving without plates doesn't afford you any real extra privacy.

But think about this, without license plates you increase your chances of being pulled over. If the case were that celebrities were driving around without plates we'd see a lot more news reports of them being pulled over.

Since I have to go to the DMV tomorrow to get my title changed I'm going to ask them if this is true. I think the DMV would be the final authority on this.

I'm NOT saying at all that he doesn't have a tag.

2) He could carry the tag in the car. If pulled - the exception may be noted with the DMV

If you aren't in California - I don't know how YOUR DMV would know. I find that most people don't know their own state's policies much less another's.

Take into account that Jobs doesn't drive a heck of a lot - and a number of events and meetings he is most likely driven or takes a private taxi/limo.

I'm in California, so my DMV better well know! So should any cop that pulls me over (which happens invariably due to my erratic driving style.)

And this is impossible:

his house is VERY close to the Apple campus and downtown San Fran.

Cupertino and San Francisco are about an hour apart. You can't be "VERY close" to both. Your statement reminds me of some generic soda the gas station near me used to sell of which they said "You can't tell it apart from Coke or Pepsi."

It's not an hour - it's 20 minutes - 40 minutes from his house to the Apple Campus or to downtown San Fran respectively.

His house IS very close to both.

His house is NOT 1 hour from the Apple campus.

When I was at the Moscone Center in 2003, I made the entire trip to all (3) in a rental car in less than an hour - traffic moves quite a bit faster than Google Maps tells the time to drive.

Man, I only wish I could afford a car like that! At the moment, I could still buy one mind you, but plastic model Mercedes are just not quite the same, now are they?