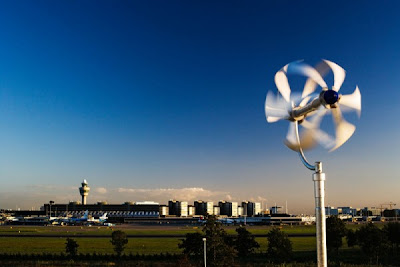 As much as we prefer a good old-fashioned bird-killin' three blade wind turbine, apparently they cause a bit too much vibration and disturbance for regular home use. That's where the Energy Ball comes in, with its spherical shape that captures wind less obtrusively and yet more efficiently. At least that's what we're told, we're a bit short on details. We do know that it's in the prototype stages and was designed by Swedish company Home Energy, who claims their smallest Energy Ball can provide about 15% of the necessary energy to power the average Swedish home.

This combined with a solar roof could easily make a self sustaining home. If we at some point had plug-in hybrid cars - we could potentially move off of oil completely. It sounds like a pipe dream - but I think as time moves on this will become reality.

Email ThisBlogThis!Share to TwitterShare to FacebookShare to Pinterest
: Easy To Be Green

Have my eye on one of these -
http://www.pacwind.net/products.html#aeo

But that Energy Ball looks neat too....