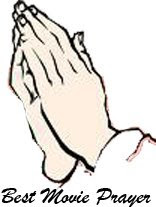 After watching Meet The Parents this weekend on video ... I decided to see if any one had done a "Best Movie Prayers" list ... usually these kind of lists make DIGG and are usually found on a website called CRACKED.COM. I searched the web and it doesn't appear anyone has made a list like this ... so I thought I would give it a try.

Do any of you have any nominations?

So far I have nominated:

Right now ... I'm gonna go for Catch Me If You Can as having the Best Prayer In A Movie.

That prayer is made by Frank Abignale, played by Leonardo DiCaprio. Abignale clasps his hands together tightly more like a victory symbol than in reverence. He bows his head, closes his eyes, and without referencing thanks for the meal or reverence for God says:

Two mice fell into a bucket of cream. One mouse quickly gave up swimming and drown, but the other mouse kept swimming and churned the cream into butter and climbed out. Amen

Best movie prayer is an interesting concept. I think there would need to be some qualification for submission to retain the spirit of this concept.

The kind of prayers that I would favor being nominated are actual prayers that inspire people to pray better. Praying is at the heart an actual conversation with God. It is not intended to be impressive or instructive to other people. I have a problem with people that seem to think that public prayer is a way of making a speech either to impress or influence other people. It is not and should not be used for this purpose.

Additionally, many of the "prayers" in movies are at the root blasphemous and poke fun at God, a belief in God, religion in general, or those that practice religion. The prayers in Talledega Nights fall into this category and make the movie which was otherwise a very funny movie into something that made me uncomfortable. Yes, it can be explained away that Will Ferrell was playing an idiot, but I don't like to see something that I find sacred lampooned like this.

The praying in "Catch Me if you Can" falls into a much different category and for that reason I could support that nomination. It is the attempt to pray by someone that does not known how to pray. It is clear in the movie that the character has no idea what to say and is falling back on a fond memory of his father that was actually sacred to him, and may have been the only thing that he found sacred. His character always treated his father with special devotion and the attempt to pray was almost endearing. You cannot fault someone for trying.

There are many good movie prayers from films like "The Passion", many inspirational sports movies like "Remember the Titans" and biographical movies that feature men of faith like "Chariots of Fire."

I think this is a really good idea and hope that the focus will be on prayers of this nature and not on prayers that Will Ferrell and his ilk seem to find useful as a cheap laugh. Again, while I understand the humor and perhaps even the intent, I find this kind of thing offensive.