The case of the slithering tether app for iPhone 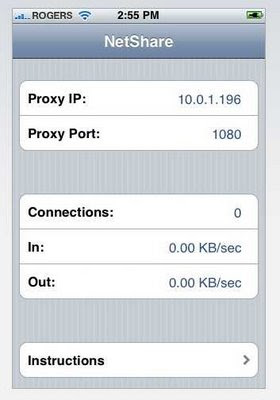 If you don't have an iPhone you probably haven't followed or cared about an app called NetShare that appeared on the iTunes App Store last week. Why should you care if you don't have an iPhone? Well ... it seems this is the first time that a cellphone manufacturer (Apple in this case) is directly challenging the terms of service of a cellular service provider (AT&T).

AT&T's terms of service for tethering on cellphones with unlimited data plans is:

Furthermore, unlimited plans (except for DataConnect and BlackBerry tethered) cannot be used for any applications that tether the device (through use of, including without limitation, connection kits, other phone/PDA-to-computer accessories, Bluetooth or any other wireless technology) to laptops, PCs, or other equipment for any purpose.

One could argue that AT&T allowed the app to be downloaded over their network and allowed use up until a certain point - so it should be their responsibility.

This story is downright bizarre. Nullriver — the company that spearheaded the Installer.app jailbreak installer project — created an App Store app called NetShare, which enables an iPhone to share its EDGE or 3G Internet connection with a Mac or PC via Wi-Fi. That seems like a crazy app to build, given that there’d seemingly be no chance that Apple would accept it. But Apple did accept it, and it appeared on the App Store yesterday, selling for $10, and it apparently works as advertised.

Soon thereafter, though, NetShare disappeared from the store. Assuming that Apple does not wish to allow phone network tethering, it seems crazy that this app got through in the first place. The name alone — let alone the product description, or the fact that it came from the creators of Installer.app — makes it very clear what it does.

UPDATE: As of this moment, NetShare is back in the App Store. I just bought a license a moment ago, as did Andy Baio.

The interesting thing that wasn't mentioned by Gruber is that you couldn't visit the App Store (through iTunes) and actually find the NetShare application page. A search for the term "netshare" yielded no results. However, if you typed the location into your browser or linked from the dozens of websites that posted the link - you could get to the app page 3 Hours after Gruber posted that message on Daring Fireball, the NetShare app was again removed from the iTunes App Store and has not returned.

As Gruber notes: Nullriver, creator of NetShare, also created the application Installer which allows and led to unlocking the iPhone for use on other carriers. It's interesting that Apple approved Nullriver as an App Store Developer to begin with.

With the recent iPhone OS 2.0.1 update many were surprised that NetShare wasn't disabled.

Apple would be in a quandary had it disabled the app. They would be forced to refund everyone who purchased the application which I'm sure by now has been in 1000's if not 10's of 1000's. Furthermore, it could cause a severe backlash and only serve to confirm Apple's heavy handedness in the App Store buying experience that critics have been so vocal about.

We’ve finally gotten in contact with Apple. Looks like the lack of communication was due to automated e-mail systems being employed on both ends, which resulted in e-mails being lost in transit. We’re working with Apple to get NetShare back up on the AppStore.

The most amazing thing about this application to me is that it essentially turns your iPhone into a mobile hotspot - much like this $200 solution that I discussed a few months back. Better still, you get to use the iPhone's unlimited data plan and not pay for a separate unlimited data plan for a wireless modem addon ($49.99 with a cellphone contract, $69.99 a month without).

* It will be interesting to see if AT&T will start to impose that artificial 5 GIG cap on unlimited plans.

Engadget video of the setup process for NetShare:

Can anyone help me out here? Did I read somewhere that someone who worked for Nullriver was hired by Apple right after the App Store announcement?

I don't believe NetShare creates a hotspot. Per the instructions on AppleInsider (http://www.appleinsider.com/articles/08/08/01/ten_step_guide_to_sharing_your_iphones_connection_with_netshare.html) you create an AdHoc network on your Mac then you connect your iPhone to that AdHoc network, then you run NetShare on your iPhone which acts as a proxy server.

Because you connect your iPhone to your Mac and not the other way around, it's not a hotspot. It's a socks proxy.

I doubt it's even possible to make your iPhone a hotspot. You'd need direct access to the WiFi hardware. If it were possible, I'm sure Nullriver would have done that instead of this kludgey socks proxy thing.

Not that NetShare isn't immensely useful, it's just not as straight forward or versatile as a hotspot app would be.

It doesn't create a hotspot - correct. I was more or less saying something laymen. Thank you for the technical correction.

True ... and I think this is another reason Apple will have a hard time "nullifying" the app.

Is that a part of the Tmobile@home service?

I have the $20-per-month unlimited internet plan. The phone is an T-mobile shadow (WiMo.) The app on the phone creates a bluetooth "hotspot" (for lack of a better term.) Very handy when my regular internet goes down