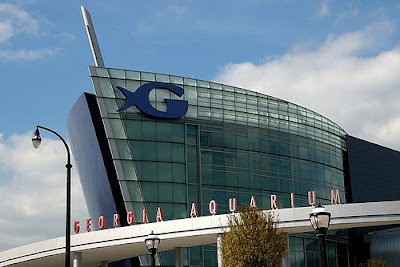 Here is the letter I wrote to visitorservices@georgiaaquarium.org about my holiday weekend trip to Atlanta Georgia's Georgia Aquarium. This letter has received no response and I'm not expecting a refund because the website and ticket makes it very clear that there are NO REFUNDS. <--- Why? I presume it's because many others have had the same experience. I don't know of many venues (even those that have NO REFUNDS policies) that don't refund if a complaint is big enough or a customer vocal enough.

My name is Philip Smith. I visited the Georgia Aquarium on Friday July 4th 2008 with my family. My party consisted of 4 adults and one child. I made my reservations online with Ticket Order #1010758686.

I had a very sour experience at the aquarium. I am contemplating writing about my experience at the Aquarium on my website http://www.fixyourthinking.com. I wanted to give the Aquarium a chance to respond to these issues and comments first before I wrote the article. I am still considering what or if to publish.

Second ... I saw a number of live reports, including one on NBC's Today Show touting "the world's largest aquarium".

I was excited to visit.

Ordering my tickets was a relatively easy process.

This is where my excitement and enjoyment of the Georgia Aquarium ends ...

Coming off of the CNN Center MARTA tram there is only one sign that we could see that pointed to the Aquarium. After that, we were confused on where to go or how to get there. Police officers were blocking any access through Centennial Park - this made a walk with my 5 year old twice as painful.

Your email confirmation wasn't clear beyond this message:

Avoid ticket window lines - Please print the documents attached to this e-mail and bring them with you. They contain important information.

I thought this meant that I would be able to enter the aquarium as soon as reaching the facility.

No where on my ticket does it explain concisely a certain time for entry or that I would have to wait if I missed that time or if I was early. The ticket is not clear that there is a large, cumbersome, and disorganized line for a security check BEFORE one can even reach the ticketing window. My tickets still had to be reticketed at WILL CALL which was a confusing process where I was told to wait in a line that wasn't moving. After a few minutes, I discovered that several other guests in front of me were also confused as to their next step in ticketing - having purchased their tickets online.

This is further complicated by a seemingly forced paid picture taking where its not clear what it is or if it is required. We chose to skip this line only to be hassled that we were missing out on something. This should be in a separate area with a sign to be clear what the picture taking is for.

Upon entering, I asked an employee closest to our entry - where we should go first. She stated she didn't know. Prompting her again for an answer she sent us to the "animals exhibit" - it was boring and overcrowded. Not a good starting point as recommended by one of your employees.

"The Aquarium offers a full menu at the Cafe Aquaria food court".

Then follows in a separate section: "There is no outside food or drink allowed in the Aquarium."

The term, "food court" implies to me that there are reasonable options to select for food. My family of 5, who already paid more than $127.00 for an Aquarium*, and had already waited in line greater than one hour for entry, was hungry within an hour of entry. Since it was difficult to navigate through the massive crowd of people, we managed to get in one hall before my family was hungry. Our plan was to come for a couple hours and eat outside the facility, then return. No where on the confirmation email does it state that there is no re-entry.

I had to search the website just to learn that there was no re-entry possible. This meant that once we were inside the facility we were trapped if we wanted to see everything.

The prices at your Cafe Aquaria are unreasonable and offer no affordable family options. My check total was $57.35. By any standard - $11.47 per person is ridiculous. I was still hungry, as was everyone in my family after eating. We got the least expensive but nourishing options on the menus.

The line at your Cafe is just as disorganized as the outside line. We didn't know where to pay, where to get in line, or what line we were in at any point.

Once we had our food in hand, there was NO WHERE to sit. I felt silly and awkward carrying two trays of food all over two floors of sparse seating.

Now at 2:00 PM and having only seen 1/5th of the aquarium ... I felt used and ripped off. Everything beyond this point seemed mediocre. To be honest; it was. I saw nothing really special at the facility. The Whale Sharks were certainly spectacular, but the touting as the world's largest aquarium seemed moot - it seemed the same size as the numerous other aquariums I have been to - in particular, Ripley's Aquarium in Gatlinburg Tennessee.

The facility seemed overcrowded with people bumping into everyone else. The speaker at the stage/large view area was being talked over by a crowd that wasn't being controlled. The noise from the crowd drown out any audio.

At this point, I cannot recommend this to any of my business associates, friends, or website readers. In fact, I will encourage them not to waste their money.

I am very unhappy with my experience and feel taken.

* I should note that I used a 15% off discount for my tickets and that they would have been $150+ instead of $127.00. Compared to other aquariums and easy locatable discounts for OTHER venues; the GA Aquarium isn't a good value.

* I will also note that in April of 2007, I went to DisneyWorld in Florida. One morning, my hotel's complimentary USAToday newspaper indicated that Disney broke their highest attendance record. I STILL saw everything, rode a few rides twice, and was done by 4PM. Each person in my party averaged $7.80 WITH A BEVERAGE when we ate there. The meal at the Aquarium included two shared drinks.

Director of the Georgia Aquarium, Joseph Handy has responded point by point to my letter and promises to address each issue. I have been issued a full refund. I will update this article with a followup post as soon as he makes his followup and the refund clears my credit card. His call was very apologetic, very cooperative, and very humble. It was one of the best follow ups I've ever received from a business.

Wow, that sounds like a complete and utter mess! I hate attractions which require extensive repeated queuing without making it clear what the purpose of the queue is or what have you. And that no outside food rule? totally unreasonable.

Good work continuing to expose good and bad experiences to the world Philip, so many people never complain in public about bad experiences meaning other people are likely to have similar ones and very few people who have good experiences explain themselves in as thorough a way as you do.

Hi Philip like yourself I too am thoroughly disapointed with GA. My family of 4 and my mother visited the aquarium 06/05/08. I didn't have problems getting in I also purchased on line tickets b/c I've never been able to get in by trying to puchase tickets at the door. But I was so hyped and all I saw was the whale sharks. My family spent A little over $60.00 for food and $200.00 2 get in.The only good thing is we visited on a thursday @ 1:00pm so it wasn't over crowed. I Didn't complain b/c my kids were happy. But the reason I'm here is while ordering my mom's ticket 1 card was decline but was billed anyway so she paid for 2 tickets I called and was given a web site I cant find refund@georgiaaquarium.org wish I had thought to get a refund!!!!

I had pretty much crossed the Georgia Aquarium off of my list of places to see. I hate waiting in line for anything, even Disney, and the only thing that makes me do it at all is the promise of a really good experience. Not having a veritable GUARANTEE of a good experience makes me not want to go because I want the travel and the wait to be worth it. As you pointed out, Disney is the example that companies and venues need to follow and that clearly was not the case here.

With the posted follow-up I have to say that I am really impressed with the proactive approach that their manager took to address your concerns. I'm looking forward to a future follow-up as to what changes were made and how he followed through with his promise to address the situation.

Pending a positive follow-up, I would probably take it off of my "ain't going there" list.

It occurred to me while I was writing this that I take your recommendations very seriously even when I don 't agree. The analytical and careful approach you take to evaluating a product, service, experience, location, service, etc. is well-thought-out and compelling and I place a lot of trust in your conclusions.

As a critical thinker myself I do that with very few resources and yours is one of them.