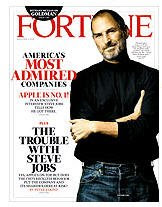 In a column about his investigation into the state of Steve Jobs’s health:

On Thursday afternoon, several hours after I’d gotten my final “Steve’s health is a private matter” — and much to my amazement — Mr. Jobs called me. “This is Steve Jobs,” he began. “You think I’m an arrogant [expletive] who thinks he’s above the law, and I think you’re a slime bucket who gets most of his facts wrong.” After that rather arresting opening, he went on to say that he would give me some details about his recent health problems, but only if I would agree to keep them off the record.

What a jerk to post any of that ... but in a way I'm glad he did ... you gotta love the confidence Jobs shows in himself.

Too many CEOs are paranoid suits who could be knocked out the door over nothing. Jobs has the power a CEO should have. He's a visionary leader, a beloved face for the company and amazingly, not irreplaceable. It's just you wouldn't want to replace him.

His deputies won't forget what he's taught them. Analysts need to learn that. I hate analysts, they carry on like experts but I mean...If they were really good at business, wouldn't they be, you know, in it?