The late two for one review: Batman: The Dark Knight & WALL-E

First, I'll start with WALL-E. This is now my most favorite Pixar film. Previously ... Monsters Inc held the top spot amongst Pixar films for me.

There are several Apple Computer references - very subtle ones too - ones that only long time Mac Owners will chuckle at. The most prominent Apple Computer reference is WALL-E's recharge full sound. WALL-E is solar powered. It takes him roughly 15 seconds to recharge and restart. When he is fully charged he makes an original Mac startup chime. It is very sweet and warms you up to him right away - even if you don't get the inside joke.

I was amazed at how well my 5 year old stay entertained even though there was almost zero narration or human conversation.

One of the tell tale signs of a good children's movie is if a child wants a toy immediately following seeing the movie. I know I wanted a WALL-E.

The story centers around one of the last functional WASTE robots from a series of trash management robots called WALL-E units.

What does WALL-E stand for?

Everyday WALL-E collects trash by sweeping into a trash compacter, compacts it into a 4x4 cube and places it neatly into piles.

Then, one day EVE, an earth observation robot appears. To WALL-E, it's love at first sight. She is also another subtle Macintosh reference - looking as though she were designed by Jonathan Ive.

The movie continues with a very entertaining and funny romance that develops as WALL-E & EVE travel across the universe.

Watch the credits at the end to see the surprise guest star voice! 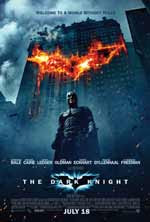 Next ... up for review and recommendation is Batman: The Dark Knight. This is a hard movie to review for me. I want to like it, but I have a number of problems with it. Critiquing this movie seems both over analytical and unnecessary to a point ... because it had its good points.

First ... the good, Christian Bale has been a favorite actor of mine since I saw him in American Psycho. I enjoy a movie where he seems to pay homage to that role - he appears to have done that several times in The Dark Knight. Both Bale and Ledger at times compete for who's the craziest - the dynamic plays out well.

Any movie with Morgan Freeman in it is a good movie. Who doesn't love his voice and good ole friend feel? Same goes for Michael Kaine as Bruce Wayne's butler.

Jack Nicholson's version of the Joker still reigns supreme in my mind ... but Ledger gave a strong, convincing role - he should win best supporting actor. As a "cool thing to do" I'm sure the Academy will award it to him.

Now for the bad casting ... Maggie Gyllenhall is just ugly to me. She isn't someone who looks like Bruce Wayne or Batman would fall for. I commented after the movie that she would have made an excellent Harley Quinn (A Joker sidekick in the comics). Rachel Dawes was played by Katie Holmes in Batman Begins - I'm not sure if I thought much better of her, but anyone with a prettier face, a more sultry voice, and a beautiful body would have been better than Maggie Gylenhall.

The movie seemed 30-45 minutes too long ... as it seemed screen time was being thrown in for Morgan Freeman, Gary Oldman, and Maggie Gylenhall. Too much detail was given to these characters that played little to no advancing of the plot.

The movie, as most Batman movies, is full of great one liners - the director and writer (Christopher Nolan) proves his talent here.

Joker:"I don't have a plan. I'm like a dog chasing a car, I wouldn't know what to do with it if I caught it."

And I can't exactly recall the phraseology of the next line by Alfred,

"Sometimes the world isn't looking for a hero, sometimes they just want a knight - a knight does what's expected of them and lets the king take all the credit"

The vehicle design, choreography, and action was incredible.

The only scene that seemed very cheap was the hospital. Gotham General was a small building in a remote place, near an industrial yard. They either need to matte a better hospital in with special effects or find a different building. That one scene seemed to cheapen the movie for me.

I really liked your review of WALL-E . Truly, this is one of those movies that you could easily treasure for the rest of your life.

I have to admit, it's certainly the best Pixar movie thus far that I have seen and it will be one of those movies that will very hard to top.

As for Eve, Jonathan Ive actually had a lot to do with her design!

For a bucket of bolts WALL-E shows more human emotion and caring than most humans ever wll! I can still see and hear the little guy calling out .... "EVE!" Precious, absolutely precious!

I mention to my friends how WALL-E's start up sound was from an old Mac - they didn't get it, but I sure did. It made the movie a little more special.