As many of you know, I advertise a USB To Ethernet adapter often here on this website - I've been selling it on eBay for 5 years. I sell roughly 10 a week. Over the years I've disassembled various USB-Ethernet adapters to discover what chips they use and how they work. When Apple introduced the first generation MacBook Air, they introduced a wired USB to Ethernet adapter as a separate $29.99 purchase - because the Air has only one USB port to conserve space on the "port pull down".


At first, I was worried that Apple might possibly eliminate a good source of income for me by introducing their own USB to Ethernet adapter. People would be more inclined to buy Apple's solution rather than mine - no matter what price I offered my adapter at. After finally winning an adapter for an Apple MacBook Air Ethernet adapter on eBay two weeks ago for the low low price of $15.00 - I am finally able to analyze the adapter and report about it.

I realize this take apart isn't as exciting as a MacBook Air or iPhone take apart - but this should serve as a reference for why Apple's MacBook Air Ethernet Adapter won't work on any other Macs that may have a bad/surged port or anyone hoping to add an ethernet port to their Macs externally.

My solution is a cheap and affordable way to connect to your cable, DSL, or wired network - I just wanted a chance to set the record straight in a straightforward, but technical way.

Here's what Apple's page has to say about this adapter ...

The Apple USB Ethernet Adapter is a simple, one-piece external adapter that plugs into the USB 2.0 port of your MacBook Air to provide 10/100BASE-T performance. Simply plug your Ethernet cable into the RJ-45 connector — no external power is required. It’s small, light, easy to install, and even easier to use.

What’s in the Box:

Several reviews such as this appear on the page:

I have read a couple of reviews on this product where some have not been able to use this product. The adapter was originally intended to be used with the Macbook Air but with the recent update in Leopard 10.5.2, this will work as long as the computer you are using is updated to 10.5.2. I have tested this as well on a G5 and G4 desktop machine as well as the laptops.

The above review is a complete fabrication. The MacBook Air Ethernet Adapter has a ROM chip located on the top of the adapter that specifically looks for the MacBook Air. The adapter will not work with ANY G3, G4, or G5 Mac. That being said ... the adapter will currently work with most Intel based Macs with the 10.5.2 update. I can assure you that Apple is in the process of closing this loophole. Why? Apple doesn't want you fixing what would normally be a complete logic board replacement - which means either $700+ or a new Mac - if not covered by AppleCare.

Why would Apple want you to get a logic board replacement if just your ethernet is blown out, if the unit is under warranty? Because, while it may cost $700.00 or more to fix outside of an AppleCare warranty - Apple has built the cost of repairs into every single computer they sell. They will take a full tax write off for the cost of the labor and parts if they fix your computer under warranty. Look at it from an "accounting perspective".

Apple sells you a computer ... $50.00* of the cost of an example $1000.00 Mac goes towards an insurance fund that will (if necessary) buy a complete replacement or any part necessary + the labor to fix if the unit needs repair under warranty. If Apple spends, let's say, $1000.00 on your repair - they simply get a check from the insurance company and most likely a tax write off on their books. What is Apple's motivation to sell you a $30.00 fix vs getting paid what, on books, appears to be a triple revenue stream from one computer.

• You buy a MacBook for $1099.99 + tax with no AppleCare
• MacBook Ethernet port goes bad on month 6 of ownership
• Apple repairs MacBook / Total cost of parts+labor=$1000
• Apple receives escrow insurance check to pay for repair
• Apple takes a tax write off / book deduction for the repair

This equals Apple getting paid once at retail, once by insurance, and once by taking a tax write off. A write off could be much greater than just the repair. A savvy company also writes off the phone operator that assisted you, the storage and warehousing of the parts, and any shipping of parts or the computer to the repair center, etc etc.

This is nothing illegal and there's no malfeasance here - it's just an example to show you why Apple wouldn't give you a $30 out - at least easily.

I have good word that Apple may start limiting the sale of its ethernet adapter ONLY to MacBook Air owners soon. 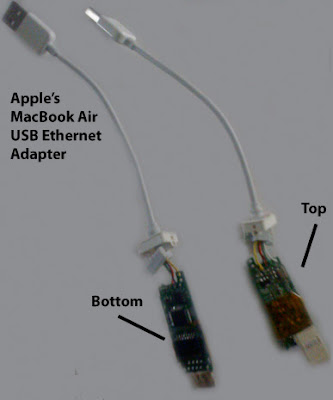 The adapter has 4 "chips" with several capacitors ...

The fourth chip listed here is an "Apple ROM chip" - this is the chip that is meant to specifically look for the MacBook Air and that is temporarily disabled in 10.5.2 - allowing the Apple USB To Ethernet Adapter to work with MacBooks and other Intel Macs.

I had the chips on Apple's ethernet adapter analyzed ... there's no ethernet/usb bridge controller - Apple's adapter is a software "interpolation and abstraction" - using a AX88772 chip - the second chip you see in the list above. The chips used on the adapter that I sell are specifically for the purpose of bridging an ethernet connection and doing the bridge on the chip rather than inside your computer. "Abstraction chips" sometimes don't process a DHCP lease and give PPOE internet connections a lot of trouble.

We've seen some reports of AX88772 based adaptors being recognized on Leopard without needing to install any drivers. The system.log reports the device is being matched by AppleUSBEthernet. We've also had some problem reports of not getting a DHCP Lease. If you're experiencing difficulty, please check the system.log to see which driver is actually being used. With the announcement of the MacBook Air, Apple began shipping their own USB-to-Ethernet adaptor which AppleUSBEthernet is designed to support. I understand Apple's USB-to-Ethernet adaptor should work on other Macs running Leopard 10.5.2 or later (Daniel Sumorok has verified this). Apple's driver is not designed to support 3rd party USB-to-Ethernet adaptors or prevoius OS versions.

Apple has complete control over their adapter and whether or not they want it to function with other Apple computers than the MacBook Air because of the "ROM chip" that they place on the board. While Sustainable Softworks driver may work for it at the moment - I would still look towards a more universal solution*.

I hope this helps.

* I made up the figure of $50.00 for AppleCare warranty insurance. It could be lower and most likely is because of Apple's high quality standards

* I tried very hard not to make this into a giant advertisement for my adapter.

I didn't say Apple has a desire to make money off of logic board replacements... they just don't have any motivation to fix the number one problem with Apple logic boards (Ethernet port being surged) - cheaply or they would have made this adapter LONG ago. Apple can claim (if they choose) that this is an act of nature - even under warranty. Your options are: my adapter (or compatible), a $700+ repair (that may or may not be covered under AppleCare), or a new Mac.

I have been intimately involved with this process and I'm aware that Apple DOES write off AppleCare in this manner. Most companies write off various aspects of warranty work.

I want to make it clear that I specifically state that Apple is doing nothing wrong.

You must go with my adapter (or someone who sells an adapter like mine) with any Apple computer under 867 Mhz - because these machines are not Leopard compatible. Furthermore, only 35% of Macs capable of BEING upgraded to Leopard HAVE been upgraded and (read below)

There is an Apple ROM on the Apple USB ethernet adapter - and Apple HAS written a low level driver that has temporarily disabled the USB Ethernet Adapter's "call" for a system check.

I have VERY good word that the loophole in Apple's adapter may be closed with the next point release or possibly by 10.5.4.

- Spoke to a close source I have inside Apple that works on point updates.

- Apple has a ROM on the adapter they sell that they can plug anything into.

This doesn't necessarily mean that someone cannot create a work around driver - it does mean that Apple may at any time disable the current "universal" driver that is in Mac OS X 10.5.2.

Proof of disabling features for security, support, or conformity is a common practice at Apple - I therefore offer this Google search: "Apple disables" & "Apple disabled" - sort through the hundreds of pages where Apple didn't just break compatibility by accident but PURPOSELY disabled features and drivers for "hacked devices".

Email ThisBlogThis!Share to TwitterShare to FacebookShare to Pinterest
: MacBook Air, USB to Ethernet Adapter For Macs