The Story Of The Irresponsible Shepherd 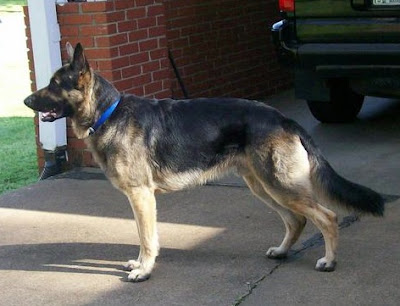 You've heard of the story ... The Boy Shepherd Who Cried Wolf ... well this is the tale of The Wolfy Looking Dog Who Cried Out For A Responsible Shepherd

I read this on a forum this morning and thought it has a good lesson ... and besides that; the dog's name is Max:

I'm sure some of you "dog people" will understand this. Every morning we walk Max (the German Shepherd) and Lady (smaller mixed shepherd). Well you all know my problems I've had getting Max not to pull on leash. They still are not solved, and the only thing that enabled me to walk him decently without him yanking me around (though he still tries) is the Halti collar (goes over the nose like a muzzle and turns his head toward me if he tries to take off.).

So every morning - it doesn't matter WHAT time we walk - there is this older man that drives by with this yappy little dog - that looks like a mini pinscher. The man ON PURPOSE rolls down his window to let the dog hang out and yap viciously at our dogs. I guess he thinks it's cute. Well Max has a freakin' FIT because he despises these little dogs since he has been attacked by two in our neighborhood. He's not a fan of ANY dog really - he'll chase the big ones, but not viciously. He just chases them if they are in our yard and once they're out of the yard, he comes back. We have a little pom across the street who stands out there like big stuff and yaps at him, but he has chased her a few times and she goes under the owner's truck so he can't get her. He finally gave up on her and she doesn't bother him anymore - she'll still bark, but he knows he can't catch her and that she's scared of him and will run. But this other dog hanging out of the truck, he doesn't know that, so he tries to go after the truck when the man comes by.

So here I am - my little 5'2" frame trying to control this 100 pound shepherd who is going beserk. Not only has he jerked by shoulder/arm/neck so hard I've had issues, as well as pulled me almost completely to the ground once where I twisted my foot really bad, but he has broken several collars as a result ($21 each and I cannot walk him without one...at least not easily), and NOW he is trying to chase ALL trucks that go by while we are walking. I about had enough of it yesterday, but cooled down on the way to work, asking God to help me deal with this anger I was feeling.

So this morning, here we go again, and he comes this man, this time letting the dog hang even MORE out the window and he go very close to us. I stopped dead in my tracks and put all my weight against Max to control him, as I knew if I were moving, there's more of a chance of me losing my footing. Well, the head collar SNAPPED. I had to quickly grab his main collar and switch the leash to it since up ahead, there was another walker with another dog Max hates (also a small yappy dog that tries to attack him)...so I didn't want Max to chase the OTHER dog. It was a fight to even get home because Max was all wound up and hauled my ass all the way to the house.

I put Max in the house, grabbed my keys and the broken collar and told my husband I was going to find the man. It's obvious he was going somewhere close by as he had the dog, as he comes by every morning and he must have something he goes to do at that time.

Well I found him in the shopping center parking lot. Apparently he goes there to clean up trash in the parking lot each morning before they open. So I pulled up in my car - right up to him and his dog - and I said are you the one going by me and my shepherd every morning letting your dog hang out the window at us? He said "oh he barks at everything". And I said "I get that, but you roll down your window on purpose and let the dog hang out. Now you might think it's cute, but it's not." I then held up the collar, explained this is the third collar in 3 weeks that has snapped because of this, and that these collars are $21 each and I don't have the money for a new one. I also said that I've been physically hurt because of the shepherd yanking me to the ground trying to chase his barking dog, AND that my dog is now trying to chase cars. I said I've invested too much in this dog to allow him to get hurt from chasing cars, and this was NOT a behavior he had ever done until now.

The man apologized and said he wouldn't do it anymore, and I pulled out of there and came home. Problem is, now I can't walk Max at all until I can buy another collar. Not unless I want to get hauled down the street (which I don't). This collar is the only thing that enables me to walk him halfway decent, and he still pulls, but it's not as hard on me as when his leash is on the regular collar.

Okay, vent over. I'm sweating like a pig...it's really humid this morning and this whole thing probably caused me to lose about 2 pounds - which is the only good thing that has come out of it!

I am a "dog person" and I want to start off by saying that dog is beautiful! BUT ... I hate to agree with this abrupt comment (posted in the forum where this was found) ... but I do.

"u have a dog that is not able to socialze and be in public. control your dog and u wont have any problems no matter what. ur dog is the problem. stop being one of those mothers who say my kid is perfect. ur dog isnt perfect and is the problem."

I can't stand dog owners who have aggressive breeds and can't train them - you need to get a stronger collar and leash or a better one than you are using. If you are too weak to handle your dog - you should have taken him to a PetSmart obedience class (you can get scholarships). Collars and leashes can be had at yard sales and flea markets for way less - be creative! And oh yeah ... responsible!

To further respond to this comment "I can't stand dog owners who have aggressive breeds and can't train them - you also need to get a stronger collar and leash."

Max is as far from "aggressive" as he can be. He only responds to what others do. He doesn't ever go after any dog aggressively unless he is provoked by the dog. He has never growled or showed teeth to another dog. He has just lunged and barked back at them. As far as humans - he's never growled or showed teeth to a human. Never chased after a human. But if a human comes after me, he will do what he is supposed to do.

He will run up to other dogs if they are in our yard. Every time this happens the other dog starts running - only natural I guess because the other dog knows he's not supposed to be here. At that point he chases them - if it's running in our yard, he thinks he's supposed to chase it. But not viciously...he just wants to play with them. Same with cats. We have cats that will run and he will chase them. If the cat doesn't run, he just goes up to it and they sniff noses. He would do the same with a dog if it didn't run.

Apparently the dog is not trained to heal - no matter what ... an agressive breed should be trained to NOT go after something unless you tell them or have a special word like "attack!!!" Your allowing him to chase things is your irresponsibility at its peak. Your comment here makes it appear as if you get a rise watching your dog bully other animals because it gives you a sense of security that he might do that to someone who harasses you.

I don't fault you for finding the man and telling him - sounds like you might have been pushy but I would have done the same thing.

German Shepherds are right behind pit bulls as an aggressive breed - they are also jumpy - your picture indicates he's always got his hauches cocked and ready to leap ... my older brother was mauled by a German Shepherd when he was 6 and had to get 40 stitches ON THE TOP OF HIS HEAD ... they are aggressive ... trust me ... there's also a reason police stopped using them and a reason the Nazi army DID use them!