The real reason the competition doesn't get it ... 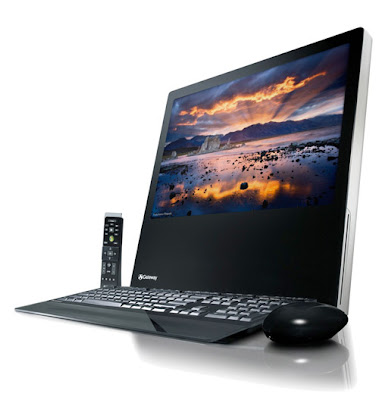 * PIcture of the Gateway One All In One Computer

John Gruber at Daring Fireball linked to what he called an insightful piece by Charlie Wood on his Moonwatcher blog:

He quoted two sources - one being Gruber:

Clayton Christensen's seminal work The Innovator's Dilemma describes how incumbent vendors typically compete by continually adding performance (typically in the form of new features) eventually overshooting the requirements of their target market and providing an opportunity for upstart competitors to provide a lower-cost "good enough" solution.

Apple doesn't sell products based on laundry lists of features. In fact, their products often lack features considered standard by competitors. For instance, the iPhone has a substandard 2 megapixel camera with no flash, no video recording capabilities, no voice dial, etc. Many of the features of the iPhone are in fact only "good enough".

Instead, Apple differentiates itself on design. Their products feel right. And to their customers, "good enough" design will never be compelling, regardless of how high Apple sets the bar.

I think that there's no one answer ... teens buy iPods because their peers have them. People buy iPhones because it's the latest gadget. People buy Macs for three reasons though: Brand loyalty, bandwagoning, preference over Windows and Linux operating systems.

The REAL reason the competition can't seem to beat Apple out is based on several factors as listed above and I'm sure a few other reasons. Design is but a small piece of the pie. The competition though thinks it's one answer like analysts John Gruber and Charlie Wood try to point out to them.

If design were the only or even the main factor - Sony would have won out long ago and would have been the number one PC manufacturer by now. Sony also has a quality and brand loyalty following much as Apple's. Again if it were just one or two factors - Sony would most likely be the Apple of today. Gateway's One all in one is a beautiful computer that, to me, is way sexier than the current iMac, has a great integration of media functions and has a lot of useful features that are easy to understand. This disqualifies Gruber's comment:

Apple is also an intellectual property firm - many fail to understand this fully. They receive a LOT of money off of licensing and affiliate income. The iPhone has leveraged affiliate income for Google searches to incredible levels for Apple. Add this to Quicktime, Safari for Windows, and iTunes. Hewlett Packard never secured a deal with one of the wireless phone carriers for a revenue sharing deal with its cell phones. Apple did! Apple understands leveraging it's intellectual property better than any company I know.

Finally, I think the analysts discount heavily (by just calling it Apple fanaticism) free advertising. Apple gets a lot of free advertising and word of mouth. This blog affectively gives Apple $500 in free advertising every month - Apple makes the Slashdot and DIGG front page almost every day.

* That's a lot of cliche

I think that Apple dominates the way it does because they offer a pure solution. Apple has always started out looking a problem as though there were no semi-solutions or "good-enough" solutions out there already. While they definitely take advantage of the fact that there are already "ingredients" in place (memory, processors, drives, plastics) they nonetheless almost always start off organically. That is why Apple is always the innovator and everyone else is always only "good enough."

When Apple came out with the Mac, they completely ignored conventional PC standards and design and came out with something completely different. The Mac not only was unique as a device, it came with several "devicelets" that were part of it, i.e. a GUI-based OS and its components, a 3.5" floppy drive, a mouse, and totally different and unique ports and their related peripherals.

The iMac did almost the exact same thing; it offered a whole new design with new technologies like USB along with the introduction of translucent plastics and colors as well as spherical shaping as opposed to angular shaping.

When the iPod came out, it was unlike any MP3 player before it, with its patented "click-wheel" technology, highly noticeable white coloring and white headphones and Dock interface.

All of the above also came with unique software designed by the same company to complement the unique hardware. The iPod even came out with a networked way of purchasing media that blazed the way for all that came after it and that still remains numero uno--iTunes.

Finally, all of the above came from an American company that represents all that is unique and cool in the vast universe of computing. This "cool" factor and the cultural phenomenon that it spawns is unmatched by Sony, HP, IBM, etc. While HP, for example, has also come out with unique inventions like the laser printer, inkjet printer, iPaq/Jornada, etc. and has a level of brand loyalty as well, you just don't see the culture that Apple has associated with the company and its users.

Apple, in short, has it all. It has the "it factor" in technology. It is the only technology company that inspires people enough to put its logo on their car, for cryin' out loud. When was the last time you saw a "Dell" sticker on a car? Or a Sony sticker for that matter?

Finally, while the Gateway computer may be compelling for some, whenever I look at it the first thing that comes to mind is "nice try, Gateway." It will never have the appeal of a Mac, because, well . . . it ain't a Mac. That's all that has to be said.