Pic Of The Week + History Lesson 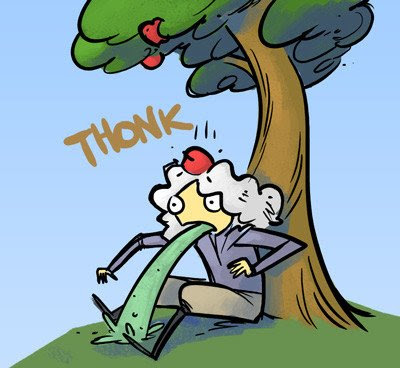 The picture above comes from CRACKED.COM's look at the "Five Lies We Were Told About History" - this cartoon was featured in #3 Newton and the Apple.

I would link to the article but it's too seedy and potty mouthed. So here it is retouched a bit:

You've probably heard of Isaac Newton. In the late 17th century, Newton practically invented science. The discoveries we can thank him for include the laws of motion, the visible spectrum, the speed of sound, the law of cooling [thermodynamics], and calculus. One wonders if anybody in history ever had a thought before Newton.

Probably his most famous discovery, however, is the law of gravity. The story goes that Newton, a modest mathematician and professor of physics, was sitting under the shade of an apple tree one sunny day, when an apple dropped from a branch and bopped him right on the head.

While most people would merely think "Ouch!" and stare warily upward for 10 minutes, Newton's first instinct was to formulate the entire set of universal laws governing the motion of gravitating bodies, a theory so sound that it went unchallenged and unmodified for over 200 years.

Newton never mentioned the thing with the apple, and in fact it was another guy named John Conduitt who first told the story some 60 years after it supposedly happened. Even then, he was decisively vague about whether Newton actually saw an apple, or whether the apple is a metaphor that he used to illustrate the idea of gravity for people less intelligent than he was

[Conduitt] "Whilst he was musing in a garden it came into his thought that the power of gravity (which brought an apple from the tree to the ground) was not limited to a certain distance from the earth but that this power must extend much further."

You'll notice that even then we don't get the thing with the apple actually hitting Newton in the head, it got added somewhere along the line to add the element of cartoonish slapstick to his genius life.

Future versions will say that Newton then vomited in agony.

We like to think complex discoveries happen this way, with a sudden light bulb popping on over our head. Kind of makes it seem like it could happen to us one day, the next great idea will just occur to us while we're wasting the afternoon on a park bench. In reality, Newton spent the best part of his life formulating and perfecting his theories.

Nice article. Until now I hadn't heard the part about him throwing up.

It's amazing enough that Newton postulated what he did, but even more so that he had to invent the mathematics to prove it!

It took someone equally brilliant (and forward-thinking) to challenge and disprove some of those notions 200 years later.