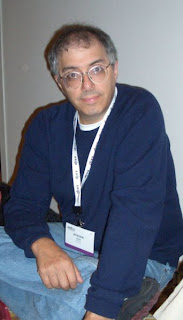 Steven Levy, invariably one of the first four or five people to post a review of just-released Apple products (ie he's got connections at Apple), is reportedly leaving Newsweek and heading to Wired (ValleyWag).

Of special note is the rumor that Newsweek is paying Levy a six-figure sum to terminate his contract early, which ValleyWag says is indicative of the sad and getter sadder state of print magazines as he was one of the genre's most-popular tech writers.

Along with David Pogue and Walt Mossberg, Levy is one of Apple's most-consistent mainstream press cheerleaders. One assumes he'll continue in that role at Wired—one assumes he'll bring his Apple contacts with him.

I've been able to talk with Levy on two occasions. Once because he edited the 2007 Best Of Technology Writing because yours truly was in it. The other; to discuss my Bidzirk vs Smith trial.

Email ThisBlogThis!Share to TwitterShare to FacebookShare to Pinterest
: Steven Levy