The Return Of The Red Band Movie Trailer 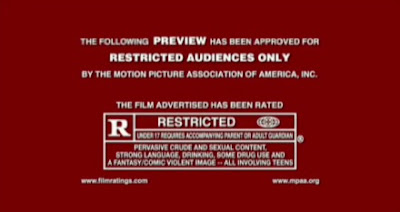 AINT IT COOL NEWS is reporting:

If you're not sure what a red band trailer is, you've probably seen a few online. It's a trailer that starts with a Red "Restricted" band instead of the Green "All Audiences" band. Pretty much that means that the trailer has a curse word in it, or a boob or some graphic violence... something that doesn't allow it to be shown to "All Audiences."

Regal Cinemas just changed that. They've decided to run Red Band trailers in their cinemas. Since Regal is the nation's largest chain, I bet we see the rest adopt this policy as well. 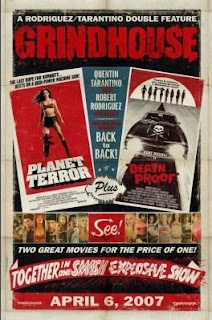 While they were certainly funny ... the "Red Band Movie Trailers" before Grindhouse were very gross. They fit in with that particular movie, but I'm not so sure that I want to see that kind of scene in front of every Rated R movie I go to see.

I like the idea of a Red Band trailer; it can show me what not to sample! Of course, now-a-days, that includes, it seems, just about everything as it that seems sex and violence everywhere on tv and in the movies.

If it can spare people, including me, some pain, then I'm all for it! I hope that everyone in the business copies it and soon.

That's a different take on it ... however ... I think the Red Band Trailer will degenerate into showing the most horrific scenes from movies that I would never go see anyway.