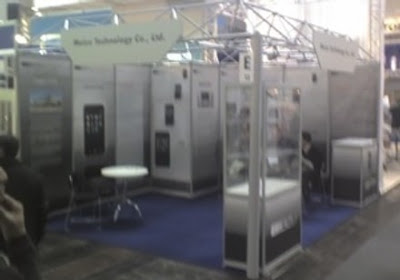 Remember how the folks at the Meizu booth swore up and down that the M8 Mini One wasn't that similar to the iPhone? Well apparently the Hanover police think otherwise. According to a report, the booth (shown above in its vacated state) was shut down by cops for piracy during CeBIT and passersby were told that, "The venue is closed until further notice." It appears, that after stopping by the M8 show, cops proceeded to confiscate equipment and literature associated with the painfully obvious knock-off, and will be making a more detailed statement on Thursday in regards to the action.

[UPDATE] Apparently Meizu was booted for not licensing MP3 technology - still a loathsome company with Meizu skirting the issue and saying, "The Meizu Mini One only plays WMAs"

Wow, how amazing! I can't believe how shameless some people are? This is just hard to believe!

They didn't do it on account of the iPhone knockoff. It was some licensing issue with one of their media players.

Meizu is back in their booth, and the phone is on display.

I saw that ... BUT ... The CEO's response was that the phone only plays wmas anyway ... that sounds fishy. The CEO of Meizu is the sleaziest / most dishonorable. CEO in all of CHina apparently.