Something I missed during my spring cleaning week was a piece by Roger Kay of BusinessWeek magazine positing that Apple's growing marketshare will soon yield new computer viruses for the Mac platform. He goes on further to make the conclusion that Apple DESERVES it.

"... this BusinessWeek piece by Roger Kay is just 10 tons of stupid."

I must say I agree. I've been thinking that lately most BusinessWeek articles seem more like: 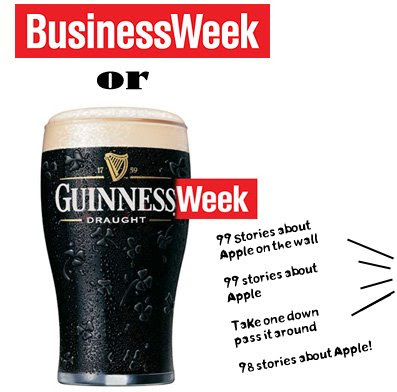 Here's a choice quote from the BusinessWeek article:

Apple sold nearly 7.8 million Mac desktop and laptop computers in 2007. That's a 37% gain over the number sold in 2006 and well more than double the 2001 volume. It's little surprise then that reports of Mac viruses have been rising steadily.

The BusinessWeek piece is laughable at best, but does merit a quality response from the likes of The Macalope and John Gruber at Daring Fireball. I just have the feeling that people WANT to believe BusinessWeek more than they do the Mac editorial blogs - and usually they do just that. (Mostly because the leading Mac editorials don't garner respect in other areas.) I have customers tell me all the time that they need to buy anti-virus programs with their Mac purchase because they've heard about all the Apple computer viruses out there. When asked to name one ... they usually say something like,

"Well I read something in BusinessWeek a few weeks ago."