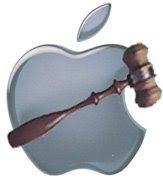 Apple's latest lawsuit comes from Mirror Worlds Technologies. The claim? Apple's Time Machine violates 4 of its patents that describing a "highly visual system that displays a line of documents & other items dating back (or forward) in time along with the option of searching these items to retrieve & edit them."

The patent seems quite vague. "Highly visual"? <--- what does that mean?

I'm not quite sure asking for "triple damages" will help Mirror Worlds Technologies case ... a judge typically doesn't allow a damage to be trebled before trial. Typically this is something that is requested during the trial IF THEIR is one. What's also curious about this case - Time Machine has been out for well over a year - why has it taken so long?